→ Languages
The following languages are only available languages for the problems from the contest
Kotlin Heroes: Episode 2:
→ Virtual participation
Virtual contest is a way to take part in past contest, as close as possible to participation on time. It is supported only ICPC mode for virtual contests. If you've seen these problems, a virtual contest is not for you - solve these problems in the archive. If you just want to solve some problem from a contest, a virtual contest is not for you - solve this problem in the archive. Never use someone else's code, read the tutorials or communicate with other person during a virtual contest.
→ Problem tags
*special problem
math
trees
*2500
No tag edit access
→ Contest materials
The problem statement has recently been changed. View the changes.
×

There are $$$n$$$ cities and $$$n-1$$$ two-way roads in Treeland. Each road connects a pair of different cities. From any city you can drive to any other, moving only along the roads. Cities are numbered from $$$1$$$ to $$$n$$$. Yes, of course, you recognized an undirected tree in this description.

There is exactly one flag in each city, in the $$$i$$$-th city the flag color is $$$c_i$$$. The colors of the flags in different cities may be the same.

When the King moves from one city to another, city heads exchange flags as a sign of their friendship. 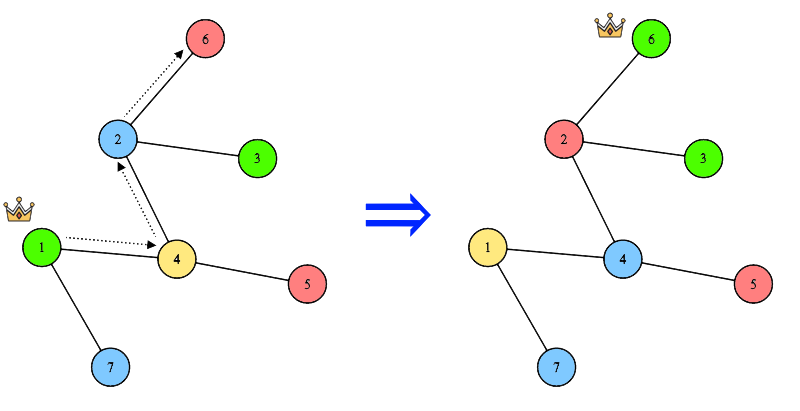 For aesthetic reasons, the King wants the flag color in the city $$$i$$$ to be equal to $$$d_i$$$ for all $$$i$$$ from $$$1$$$ to $$$n$$$. Determine whether the King can choose some route and drive along it so that for each city the flag color in it turns out to be equal to the desired color $$$d_i$$$. Note that the King can choose (and drive) exactly one route. If yes, find the shortest possible route for the King.

It is guaranteed that from every city you can get to any other by road (in other words, the system of cities and roads forms an undirected tree).

Print the answers to all cases in the order of their appearance in the input data.