There is a directed graph on $$$n$$$ vertices numbered $$$1$$$ through $$$n$$$ where each vertex (except $$$n$$$) has two outgoing arcs, red and blue. At any point in time, exactly one of the arcs is active for each vertex. Initially, all blue arcs are active and there is a token located at vertex $$$1$$$. In one second, the vertex with token first switches its active arcs — the inactive arc becomes active and vice versa. Then, the token is moved along the active arc. When the token reaches the vertex $$$n$$$, it stops. It is guaranteed that $$$n$$$ is reachable via arcs from every vertex.

For each query, determine whether the given state is reachable from the initial state and the first time this configuration appears. Note that the two operations (change active arc and traverse it) are atomic — a state is not considered reached if it appears after changing the active arc but before traversing it.

Output $$$q$$$ lines, each containing answer to a single query.

The graph in the first example is depticed in the figure below. 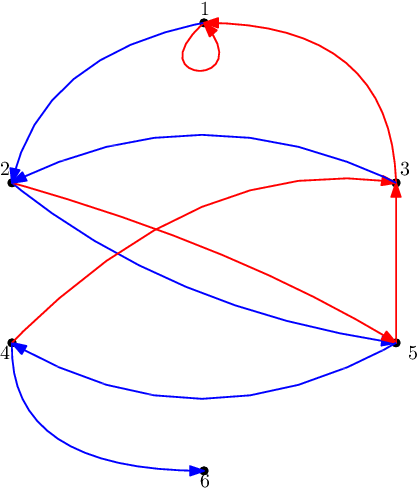