That's right. I'm a Purdue student, and I shamelessly wrote a problem about trains. 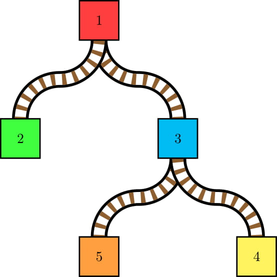 Every train has a destination station $$$s_i$$$. When it enters $$$s_i$$$, it will stop there permanently. If at some point the train is going in the wrong direction, so that it will never be able to reach $$$s_i$$$ no matter where the switches point, it will immediately explode.

Find the latest possible time of the first explosion if you change switches optimally, or determine that you can direct every train to its destination so that no explosion occurs. Also, find the minimum number of times you need to change a switch to achieve this.

Output two integers: the latest possible time of the first explosion (or $$$-1$$$ if it is possible to never have an explosion) and the minimum number of switch changes to achieve it.

For the first test, here's an example timeline: