→ Attention
The package for this problem was not updated by the problem writer or Codeforces administration after we've upgraded the judging servers. To adjust the time limit constraint, a solution execution time will be multiplied by 2. For example, if your solution works for 400 ms on judging servers, then the value 800 ms will be displayed and used to determine the verdict.
→ Virtual participation
Virtual contest is a way to take part in past contest, as close as possible to participation on time. It is supported only ICPC mode for virtual contests. If you've seen these problems, a virtual contest is not for you - solve these problems in the archive. If you just want to solve some problem from a contest, a virtual contest is not for you - solve this problem in the archive. Never use someone else's code, read the tutorials or communicate with other person during a virtual contest.
→ Problem tags
data structures
dp
geometry
math
sortings
*2700
No tag edit access
→ Contest materials
The problem statement has recently been changed. View the changes.
×

In the evenings Donkey would join Shrek to look at the stars. They would sit on a log, sipping tea and they would watch the starry sky. The sky hung above the roof, right behind the chimney. Shrek's stars were to the right of the chimney and the Donkey's stars were to the left. Most days the Donkey would just count the stars, so he knew that they are exactly n. This time he wanted a challenge. He imagined a coordinate system: he put the origin of the coordinates at the intersection of the roof and the chimney, directed the OX axis to the left along the roof and the OY axis — up along the chimney (see figure). The Donkey imagined two rays emanating from he origin of axes at angles α1 and α2 to the OX axis. 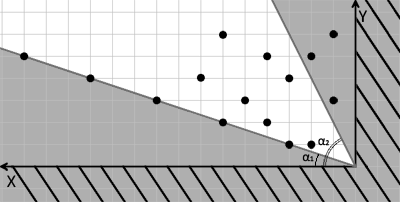 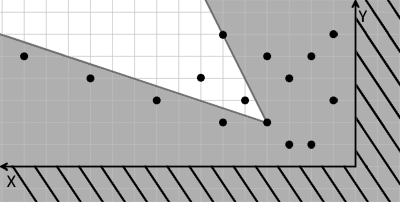 As a result, the Donkey gets a chain of stars. He can consecutively get to each star if he acts by the given rules.

Your task is to find the maximum number of stars m that the Donkey's chain can contain.

Note that the chain must necessarily start in the point of the origin of the axes, that isn't taken into consideration while counting the number m of stars in the chain.

It is guaranteed that all stars have distinct coordinates.

In a single line print number m — the answer to the problem.

In the sample the longest chain the Donkey can build consists of four stars. Note that the Donkey can't choose the stars that lie on the rays he imagines. 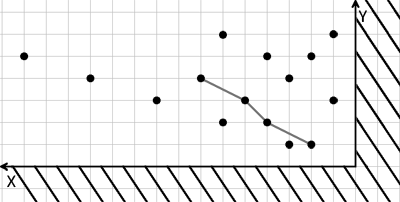