Vasya and Petya are using an interesting data storing structure: a pyramid.

The pyramid consists of n rows, the i-th row contains i cells. Each row is shifted half a cell to the left relative to the previous row. The cells are numbered by integers from 1 to

as shown on the picture below.

This data structure can perform operations of two types:

Vasya and Petya had two identical pyramids. Vasya changed some cells in his pyramid and he now wants to send his changes to Petya. For that, he wants to find a sequence of operations at which Petya can repeat all Vasya's changes. Among all possible sequences, Vasya has to pick the minimum one (the one that contains the fewest numbers).

You have a pyramid of n rows with k changed cells. Find the sequence of operations which result in each of the k changed cells being changed by at least one operation. Among all the possible sequences pick the one that contains the fewest numbers.

The next k lines contain the coordinates of the modified cells ri and ci (1 ≤ ci ≤ ri ≤ n) — the row and the cell's number in the row. All cells are distinct.

Print a single number showing how many numbers the final sequence has.

One of the possible solutions of the first sample consists of two operations: 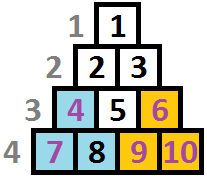