355B - Vasya and Public Transport

If we buy a ticket of the fourth type, we don't have to buy anything else, so, the answer is min(c4, answer using tickets of first three types).

Now, when we don't have ticket of the fourth type, we can solve the task separately for buses and trolleys.

Solving the problem only for buses: if we buy a ticket of the third type, we don't have to buy anything else, so, the answer is min(c3, answer using tickets of first two types).

Now it is not difficult to obtain the following solution:

Brute force how many times we will use operation from the left. So, if we use it k times, then it's clear, that we will take first k items by the left operations and last (n - k) items by the right operations. So, robot will spend sumLeft[k]·l + sumRight[n - k]·r energy plus some penalty for the same operations. To minimize this penalty we should perform the operations in the following order LRLRL ... RLRLLLLL ..., starting from the bigger set. For example, if k = 7, n - k = 4, we should perform operations in this order: LRLRLRLRL LL. So, we will have to pay the penalty two times (7 - 4 - 1).

Let call a set of cells which corresponds to some string s a state. One state can correspond to different strings. We can't brute force all possible strings, because their count — 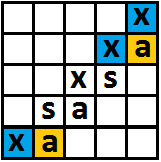 Now, for each state we can calculate a value of (count of letters A  -  count of letters B) in the string, starting from this state. If at the moment is first players turn (an even diagonal), we have to maximize this value, otherwise — minimize. It can be implemented as recursion with memoization.

The winner can be determined by the value of state, which corresponds to the single cell (1, 1).

. In this case we will brute force answer from k + 1 to m. We can check, if number d is a correct answer in the following way:

We have to check that ai mod d ≤ k for some fixed d, which is equals to

. Since all these intervals [x·d..x·d + k] doesn't intersects each with other, we can just check that

Time complexity: O(maxA log maxA), proof is based on the sum of harmonic series. 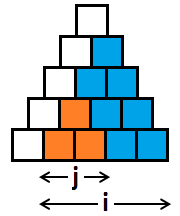 This tasks is solvable with dynamic programming. First of all let consider solution with complexity O(n3).

How to recalculate such DP? It's clear that in the leftmost column (inside the blue area) we will choose at most one cell as the top of some subpyramid. If we choose two, then the smallest one will lie fully inside the biggest one (as the orange subpyramid lies inside the blue one). Now, let brute force the cell, which will be the top of subpyramid in this column in time O(n) and we will obtain the following transition:

To simplify the formulas, let assume that

0 ≤ k ≤ i, where k is the height on which we will choose our top cell, or 0, if we don't choose any subpyramid in this column. sumUp[i][p] — count of special cells in the i-th column at height starting from p, this cells we will have to transfer one by one, using the first type operations.

We can reduce the complexity by one n, if we will recalculate out DP in the following way:

The proof that this is correct is quite simple and is left to the reader. :)

Also, we can observe that it is not profitably to take some subpyramid with height greater than

, because for such subpyramid we will pay  > 3k, but if we transfer all cells using the first type operations we will pay only 3k. So, the second dimension (j) in out DP can be reduced to

Also, to receive AC, you should store only last 2 layers of the DP, otherwise there will be not enough memory.

Author's solution, much more complicated than suggested by many participants during the competition, easy solution will be described below.

Now, we can say that for N ≤ 10000 we have a solution, which is found using DP. Let's solve the task for larger values of N.

Now it is guaranteed that solutions exists for both N1 and N2, moreover, the solution for number N1 will contain only numbers of not more than 3 digits ( < 1000). The proof is quite easy: if N1 < 4000 — it is obvious; else — if the solution uses some number of the form (4000 + some_lucky_number), we can replace it with just some_lucky_number and receive a correct solution for number (N1 - 4000), but is doesn't exist!

So, the solution for number N1 we have found using DP, now let's find the solution for N2. If it will contains only of numbers of the form (some_lucky_number × 1000), then we will be able to easily merge this solution with solution for N1, so, let's find such a solution. Here we will use the fact that N2 is divisible by 4. For simplicity, let's divide N2 by 1000 and in the end multiply all Ans2(i) by the same 1000. Let P = N2 / 4. Now, let's construct the solution. Consider, for example, P = 95: we will walk through digits of this number, last digit — 5, means that we want to put digit 4 at the last decimal position of five answer numbers — ok, put it and in the last, sixth, number leave there digit 0. Go forward, digit 9 — we don't have nine numbers, but we can replace seven fours with four sevens, then to the second position we have to put (9 - 7) fours and 4 sevens, in total — 6 numbers, exactly as much as we have.

Time complexity for one number: O(logN).

During the competition many participants have wrote the following solution:

dp[i][j] — can we put the digit to the last i decimal positions of the answer number in such way that we will get correct last i digits in the sum and with carry to the next position equals to j. Then the solution exist iff dp[19][0] = true. To restore the answer we just have to remember for each state the previous state. Base — dp[0][0] = true. Transition — brute force how many fours and sevens we will put to the i-th position.