Asking for help with problems from running contests — what's wrong with people?

As you may know, Codechef long challenge is currently running. After the first one, I thought that I should just ignore it, but I've received a second ask for help with a problem from this contest...

Probably I'm not the only one being asked and that there may be more questions in the future. I'm always surprised by such questions. If you don't know how to solve a problem and you want to be able to solve it someday, then trying to cheat definitely won't make you such a person. What's their motivation if not just solving the problem (which makes no sense, because in this way you should just want to get better)? A bet with friends? Asking random people who are able to tell admins about this question is not a good idea then. Wanting to get a higher rating? Also stupid, you shouldn't get a rating to show that you are good, you should be good to show that you are able to get a rating.

So, my question is how do you guys react in such situations. Here are my replies if somebody is interested. 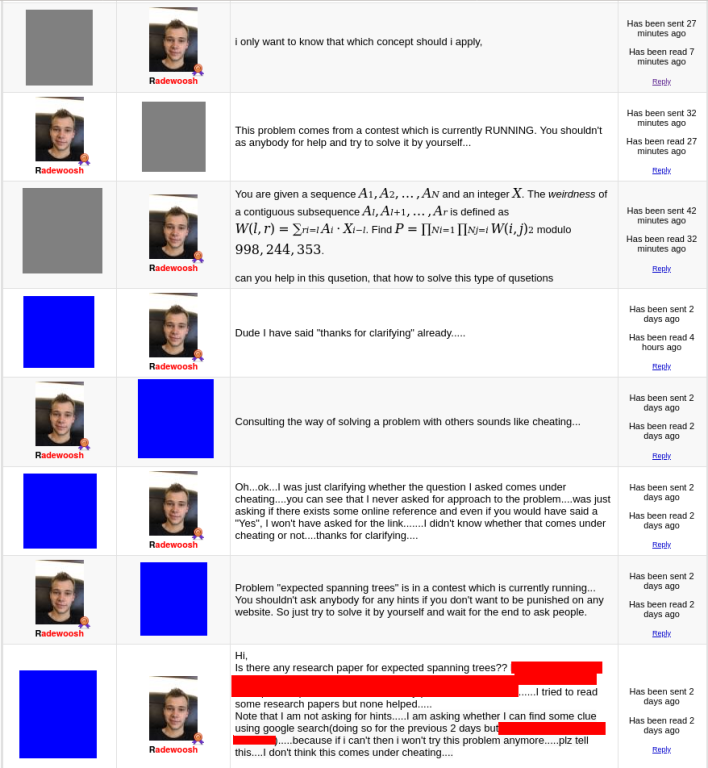 Should I show their nicknames? Should just this blog and discussion be a way to show them that they should try to solve them by themselves? Probably it won't be the first discussion about it. I don't know, maybe making the world better is just a dream, but let me know what do you think in the comments.

Also, please note that I'm a bit irritated, as they used "question" instead of "problem"/"task".