Rating changes for last rounds are temporarily rolled back. They will be returned soon. ×
→ Attention
The package for this problem was not updated by the problem writer or Codeforces administration after we've upgraded the judging servers. To adjust the time limit constraint, a solution execution time will be multiplied by 2. For example, if your solution works for 400 ms on judging servers, then the value 800 ms will be displayed and used to determine the verdict.
→ Virtual participation
Virtual contest is a way to take part in past contest, as close as possible to participation on time. It is supported only ICPC mode for virtual contests. If you've seen these problems, a virtual contest is not for you - solve these problems in the archive. If you just want to solve some problem from a contest, a virtual contest is not for you - solve this problem in the archive. Never use someone else's code, read the tutorials or communicate with other person during a virtual contest.
→ Problem tags
brute force
geometry
*1600
No tag edit access
→ Contest materials
The problem statement has recently been changed. View the changes.
×

One day Vasya was going home when he saw a box lying on the road. The box can be represented as a rectangular parallelepiped. Vasya needed no time to realize that the box is special, as all its edges are parallel to the coordinate axes, one of its vertices is at point (0, 0, 0), and the opposite one is at point (x1, y1, z1). The six faces of the box contain some numbers a1, a2, ..., a6, exactly one number right in the center of each face. 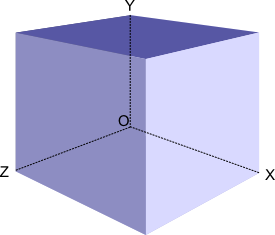 The numbers are located on the box like that:

At the moment Vasya is looking at the box from point (x, y, z). Find the sum of numbers that Vasya sees. Note that all faces of the box are not transparent and Vasya can't see the numbers through the box. The picture contains transparent faces just to make it easier to perceive. You can consider that if Vasya is looking from point, lying on the plane of some face, than he can not see the number that is written on this face. It is enough to see the center of a face to see the corresponding number for Vasya. Also note that Vasya always reads correctly the ai numbers that he sees, independently of their rotation, angle and other factors (that is, for example, if Vasya sees some ai = 6, then he can't mistake this number for 9 and so on).

It is guaranteed that point (x, y, z) is located strictly outside the box.

Print a single integer — the sum of all numbers on the box faces that Vasya sees.

The first sample corresponds to perspective, depicted on the picture. Vasya sees numbers a2 (on the top face that is the darkest), a6 (on the right face that is the lightest) and a4 (on the left visible face).

In the second sample Vasya can only see number a4.