→ Attention
The package for this problem was not updated by the problem writer or Codeforces administration after we've upgraded the judging servers. To adjust the time limit constraint, a solution execution time will be multiplied by 2. For example, if your solution works for 400 ms on judging servers, then the value 800 ms will be displayed and used to determine the verdict.
→ Virtual participation
Virtual contest is a way to take part in past contest, as close as possible to participation on time. It is supported only ICPC mode for virtual contests. If you've seen these problems, a virtual contest is not for you - solve these problems in the archive. If you just want to solve some problem from a contest, a virtual contest is not for you - solve this problem in the archive. Never use someone else's code, read the tutorials or communicate with other person during a virtual contest.
→ Problem tags
bitmasks
combinatorics
dp
implementation
*2700
No tag edit access
→ Contest materials
The problem statement has recently been changed. View the changes.
×

Vasily the bear has two favorite integers n and k and a pencil. Besides, he's got k jars with different water color paints. All jars are numbered in some manner from 1 to k, inclusive. The jar number i contains the paint of the i-th color.

The sample of the final picture at n = 0 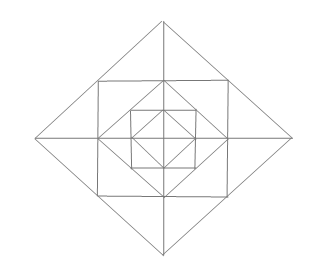 The sample of the final picture at n = 2

The bear decided to paint the resulting picture in k moves. The i-th move consists of the following stages:

Note that after the k-th move some parts of the picture can stay unpainted.

The bear asked you to calculate, how many distinct ways there are to paint his picture. A way to paint the picture is a sequence of three-element sets of points he chose on each step. Two sequences are considered distinct if there is such number i (1 ≤ i ≤ k), that the i-th members of these sequences do not coincide as sets. As the sought number can be rather large, you only need to calculate the remainder after dividing it by number 1000000007 (109 + 7).