Amr bought a new video game "Guess Your Way Out! II". The goal of the game is to find an exit from the maze that looks like a perfect binary tree of height h. The player is initially standing at the root of the tree and the exit from the tree is located at some leaf node.

Let's index all the nodes of the tree such that

The level of a node is defined as 1 for a root, or 1 + level of parent of the node otherwise. The vertices of the level h are called leaves. The exit to the maze is located at some leaf node n, the player doesn't know where the exit is so he has to guess his way out!

In the new version of the game the player is allowed to ask questions on the format "Does the ancestor(exit, i) node number belong to the range [L, R]?". Here ancestor(v, i) is the ancestor of a node v that located in the level i. The game will answer with "Yes" or "No" only. The game is designed such that it doesn't always answer correctly, and sometimes it cheats to confuse the player!.

If the information provided by the game is contradictory output "Game cheated!" without the quotes.

Else if you can uniquely identify the exit to the maze output its index.

Otherwise output "Data not sufficient!" without the quotes.

In the second sample test there are 8 leaf nodes. After the first question the exit is in the range [10, 14]. After the second and the third questions only node number 14 is correct. Check the picture below to fully understand. 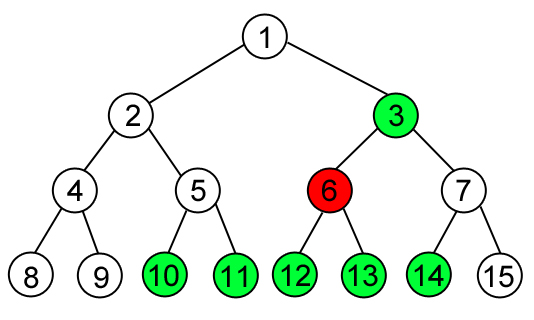