PSA: GitHub copilot may share your code during contest

By Egor, history, 5 months ago,

During Codechef Starters 55 when I solved non-scoring problems I've got following helpful suggestion from copilot: 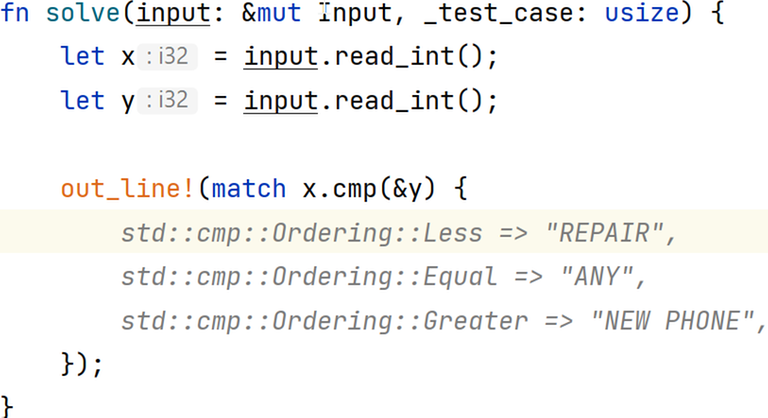 Seems oddly specific, right? So if you use copilot during contests you should disable following option:

Rust 1.58 was just released (rust releases new version every 6 weeks). The only feature relevant to competitive programming is this:

Now named arguments can also be captured from the surrounding scope, like:

This may also be used in formatting parameters:

Format strings can only capture plain identifiers, not arbitrary paths or expressions. For more complicated arguments, either assign them to a local name first, or use the older name = expression style of formatting arguments.

This feature works in all macros accepting format strings. However, one corner case is the panic! macro in 2015 and 2018 editions, where panic!("{ident}") is still treated as an unformatted string -- the compiler will warn about this not having the intended effect. Due to the 2021 edition's update of panic macros for improved consistency, this works as expected in 2021 panic!.

I'd like to introduce new tool to use rust in competitive programming. Tool support parsing tasks (by using Competitive companion, testing on samples and additional tests, generating full source file when you use your library and generating unit tests based on tasks you solved.

You can checkout example repository with instructions on how to use from here. Huge thanks to qwerty787788 for extracting helper to a separate project

To use with Competitive companion you need to set custom ports in plugin settings to include 4244. 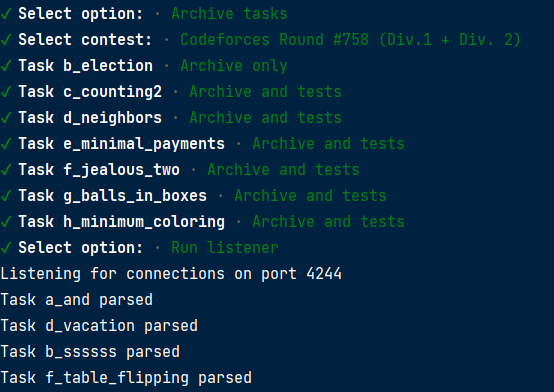 I will stream TCO finals tomorrow on my channel

Top 8 of Lockout Championship is scheduled for today

I will stream my matches. You can find my stream here, it would also be shown in the streams panel on the right. For obvious reasons I would not interact with chat during rounds, but I can answer your questions in between rounds

I've got plans for at least 2 streams this week

Join me on my twitch channel. I would try to explain my thoughts during the contest and will answer questions from chat. You can ask any questions, not necessarily ones about these contests.

UPD3: unfortunately I have to cancel stream today, hope there will be one next week

Tomorrow I am going to stream Codeforces Round #659 and plan to start the stream shortly after the round ends on my twitch channel. I would try to explain my thoughts during the contest and will answer questions from chat. You can ask any questions, not necessarily ones about this contest.

I also plan to record topcoder SRM #788, I am not yet sure if I'll just put it on youtube with no commentaries or stream it over week end (or maybe we can try to watch both tomorrow on 2x speed, we'll see)

UPD2: finished with SRM, on to codeforces round

Today I am going to stream Codeforces Round #656 and plan to start the stream 5 minutes after the round ends on my twitch channel. I would try to explain my thoughts during the contest and will answer questions from chat. You can ask any questions, not necessarily ones about this contest

I am going to try new format — I prerecorded my (rather poor) participation in topcoder open round 2a today and will stream it in about 2 hours from now on my twitch channel. I would try to explain my thoughts during the contest and will answer questions from chat. Hope to see you all!

By Egor, history, 5 years ago, translation,

Once again, I collected as much info as I could from open and not so open sources and now I need your help to recetify any errors and omissions

Here what I have atm: link

To World Finals contestants and coaches

By Egor, history, 6 years ago,

World Finals is near us once again and I am trying to collect data about participants once again. This year we are able to collect your Codeforces and TopCoder handles through icpc.baylor.edu profiles. If you'd log in into the site and go Profile -> Social Media you'd be able to enter your handles. I would kindly request everyone to do just that.

I'll publish data I gathered in a couple of days, if you notice any errors I'd appreciate if you post about them either in comments to this post or in personal messages

Data will no longer be pulled from Baylor database, if you want to update something — fire me personal message

By Egor, history, 7 years ago,

In order to correctly get your data for ICPC Live translation I kindly ask to update your codeforces profile name to the same name listed on MyICPC in your profile. If your TC handle differs from Codeforces one, I would be glad if you send me your TC handle/put it in comments section

UPD: here's pretty raw data I accumulated so far. If you want to add your handles for TC/CF or correct any error feel free to comment this post/send me message

By Egor, history, 7 years ago,

Contest is finished, you may discuss problems

By Egor, history, 8 years ago,

Support for interactive tasks added. By default you would interact using user input, but you can write your own interractor

Task format is changes to JSON. I would recomment backing up your project before updating

We would appreciate all and any feedback. You can find full footage of this year ICPC Live here. You can leave comments here or contact me through PM.

Create your own ICPC cheering party, join one in your city or just follow ACM ICPC World Finals Live

The last but not the least interesting team is ITMO University's team 1.

ITMO has most championship titles, 5, out of 19 finals they participated in. They've got 10 Gold medals total, 1 Silver and 1 Bronze.

This year team consist of 2 Bronze Medalist from 2014, Borys and Artem, and World Champion from 2013, Gennady. Team is on first place in OpenCup Standings, won numerous contest this year and universally regarded as favorite to win World Finals, are coached by Andrey Stankevich. 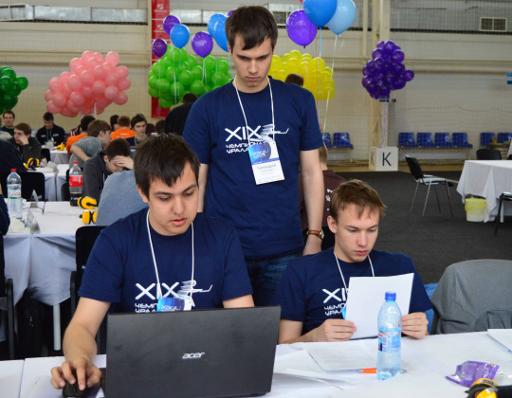 It would be really unlikely for ITMO not to win Gold Medals, I have their chances at 99%. I think their chances to win is about 75%.

This year my alma mater is represented by team Moscow SU Tapirs.

Moscow State University has a long history at World Finals. 19 appearences, 4 Gold medals (all of them — 2nd places), 1 Silver and 7 Bronzes. Moscow SU is also 2 times champions of Europe.

Tapirs team came 2nd last year in Yekaterinburg in intense battle with St. Petersburg State University. In NEERC 2014 they came second as well, while losing to ITMO University team only on penalty time. Moscow SU is currently 3rd in OpenCup standings with one stage win. They had bested ITMO team on 2 more stages. Anton Pankratiev is team coach. 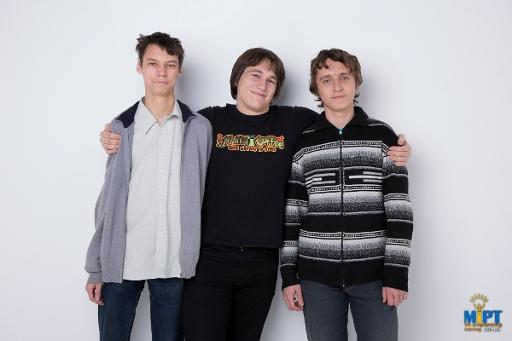 This team got only stronger since last year. Their chance to win Gold are at least 80%, while they had shoy at Championship as well, with about 15% chance.

Last team to look at will be ITMO University team.

Team preview: The University of Tokyo

They won regional contests in Tokyo and Kuala Lumpur, only team in Asia this year with such achievement. Team is currently on 17th place in OpenCup standings, although they skipped several stages and not always had optimal line-up. Tomoyuki Kaneko coaching them. 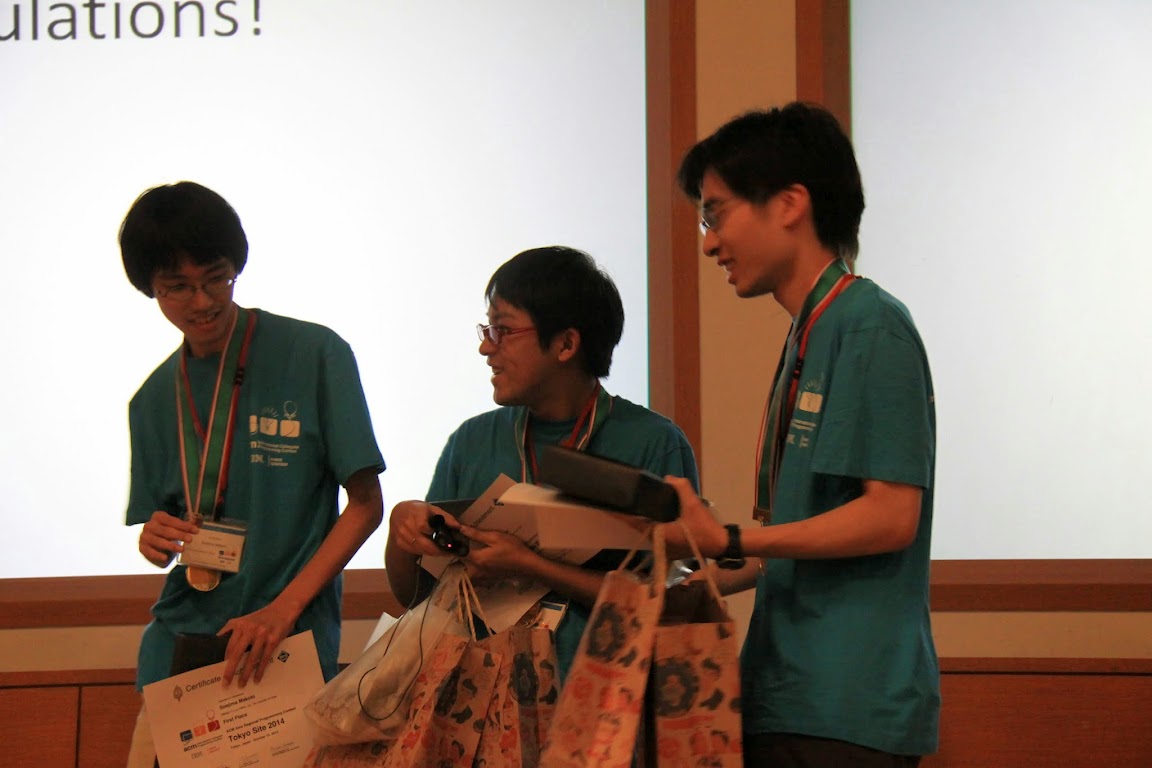 While this team has really strong line up it's results are inconsistent. I'd give them 70% for Gold and about 5% to win.

Tomorrow we will look at team from my alma mater, Moscow State University.

icpc2015, marrakech, world finals, team preview, the u of tokyo

Second team to look at is University of Zagreb

Once again, this third appearance of Zagreb’s team at World Finals and both in 2008 and last year teams got Silver medals. Stjepan Glavina and Ivan Katanic both participated in 2014 Finals.

Team decisively won CERC 2014 with 10 solved problems to second place’s 8. They participated in 3 stages of OpenCup, not very successfully though, and with 15 points are currently in 73rd place. Team also finished 5th in elimination round of Deadline 24. Zagreb’s coach is Kresimir Malnar. 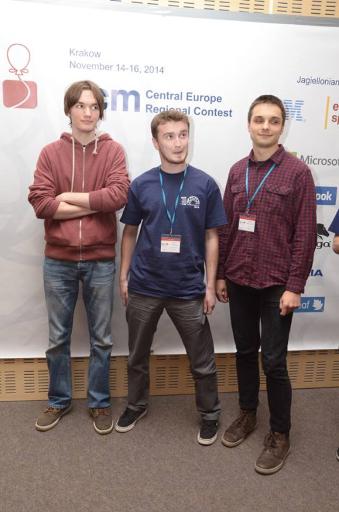 This team as about on par with Lviv, so I predict about 60% chance to get Gold medals and 1% for win.

Check back tomorrow as we’d look at University of Tokyo team.

Hello, this is Egor. Today we are starting previewing some teams from ACM ICPC World Finals in Marrakech that, by my opinion, have most chances to win gold medals. First to go is Lviv National University team LNU Penguins.

Some trivia: Lviv NU participated just 2 times, but got gold one of those times, in 2008. One of participants of that team, Vasyl Biletsky, is current team's coach (but we should note that he actually was his own team's coach in 2008 as well).

This year team qualified to World Finals as winners of SEERC. They are currently 11th in OpenCup standings (do note, however, that there are many teams in that standing that are not ICPC eligible for one reason or another). 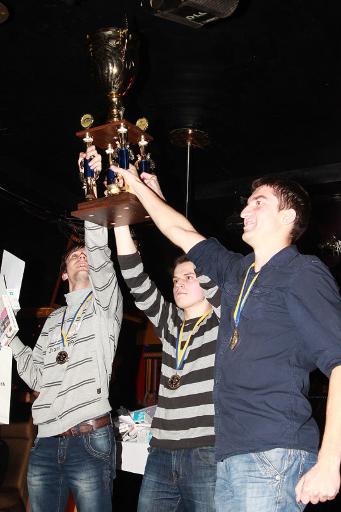 I believe this team has decent chance to clench gold, about 60%, while their chances to win are slim, about 1% or so.

Stay tuned for tomorrow as we will look at our next team from University of Zagreb!

Some photos from contest and closing ceremony

Winners will be announced shortly!

Speeches, videos and performances — all the usual things for closing ceremony.

3:01 Contest is over. Congratulations to all finalists and good job

2:32 Last half hour is upon us which mean no more updates to scoreboard. Come back tomorrow for closing ceremony and winners announcement

2:22 Eugene solved G as well. Would it be enough to clench the title?

2:05 Problem D is penultimate problem to be solved thanks to Peyman Jabbarzade. Less than an hour left in the contest, scoreboard will be frozed for the last 30 minutes

1:53 Problem G is solved as well. Only problems D and F are unsolved (though I solved them both during test run)

1:39 And finally he is successful. Meanwhile Ali Haghani tries to solve H. No luck as of yet

1:34 RussiaMustDie still debugging E — one of his asserts fails

1:22 RussiaMustDie debugging samples on E. This is also the problem I had not solved during test round (and still don't know how to solve)

1:18 No much happening near the top at the moment

0:40 During test run I solved 6 problems, but H was not one of them (I solved it within half hour afterwards though)

0:23 A lot of correct submissions on problem A, problems B and H are also "opened"

0:10 Eryx tries to tackle first problem as well, but not successful yet

0:08 But we have our first Accepted. Congratulations to Ali

0:06 Most participants just read problem statements (there are paper ones), not yet trying to code anything

-?:?? Contest is delayed. Currently short test round is conducted. Finalists set up their equipment

-0:13 Last preparations are made. Participants waiting in the hotel lobby

-0:52 Participants had finished their breakfast and will shortly arrive to contest area

-3:00 Finals are supposed to start in 3 hours. Stay tuned