Looks N^3, but seems to be N^2 after constructing many cases. Any proofs/can you hack it? 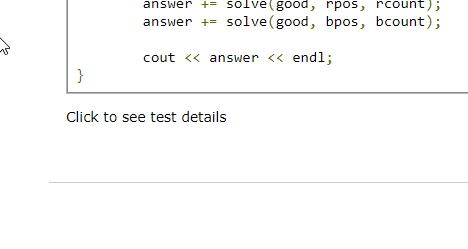 Where am I supposed to click lol, I tried clicking everywhere but nothing came up

What's up gamers, it's time for my first blog post. Think about this:

Chess except on each turn you can move a piece 1/10 of a square instead of to the current squares. Each piece is limited to the range of motion afforded by their moves in chess 1.0 (which we now refer to as "Lame chess"). Like if you had a horse then you could move it in the direction represented by the <2, 1> vector but instead of being <2, 1> it's scaled down so the magnitude is 1/10. This way not everything is a straight line.

Pieces are represented as coordinate points, which start in the center of the cells that they start in for lame chess. When a piece enters another cell, if there is an enemy piece or pieces in that cell, then all enemy pieces in the cell will be deleted. Note: you can stack your own soldiers in a cell, that's what bunk beds are all about.

Truly this is the most intellectual game of all games. In fact, it's so intellectual that no computer has ever beaten a human in a game of chess 2.0. (That's because no computer has ever played a human in chess 2.0, but we'll leave that fact aside for now.) Compared to pathetic games like chess, go, and arimaa, chess 2.0 is objectively superior. Like, the game tree complexity is through the roof. (Probably. I haven't actually tested it. But if it's not through the roof, just change 1/10 to 1/100 or something; then I can promise you it will be through the roof.) What can I say except intellectual? In other words: big brain gamers only.

Sounds dope huh? As the world champion of chess 2.0 and the player with the most hours logged in game, I'm fully qualified to tell you that this game is absolutely, certifiably awesome. I'm releasing this as an open source (source = this post) donation to the community (I am truly generous, I know).

Chess 2.0. Impress your friends with your intellectual prowess (if you have any). Best game in the universe. Play now, in my codeforces dm's. TwentyOneHundredOrBust out