By eduardische, history, 4 days ago,

Just a quick update from the IC concerning IOI 2020 and beyond. The IC held an online meeting yesterday on May 25. After some discussion, the following plan was approved unanimously:

Thanks to the dedicated work by the Singapore host team, all possibilities for an onsite IOI 2020 were explored. Unfortunately unpredictable outlook of COVID-19 forced us to move the competition online. Furthermore, thanks to Eslam and the Egyptian host team for switching to host IOI 2024 so that Singapore can host IOI 2021 onsite.

With the move to an online competition, many working details will need to be discussed by IC, ISC and ITC. We will keep you all updated as more information becomes available. If you have any questions or suggestions, please contact the IOI Secretariat at secretary.ioinformatics@gmail.com.

IOI – Honourable Mentions and other updates

By eduardische, history, 3 months ago,

I wanted to share several updates related to IOI after the International Committee meeting in February in Singapore.

By eduardische, history, 9 months ago,

The draft of IOI 2020 rules is now available.

This has been approved at IOI 2019 GA, since there was a desire to know major rule changes a year in advance. To allow flexibility, some minor changes are still possible, and the final version will be as usual presented at IOI 2020 GA.

By eduardische, history, 13 months ago,

The proposed IOI 2019 rules are also available. The most notable change is the removal of live feedback on overall scoreboard used at IOI 2018. Please note that these rules need to be approved at IOI 2019 GA before they will take effect.

By eduardische, history, 2 years ago,

Registration for the Google Code Jam 2018 is now open.

Also, there are some pretty big changes for this year as they have a new system to compile and run code themselves. Kind of really sad for me, because the ability to submit the code in any language you want and the multilanguage leaderboards were what made the contest unique in my eyes. 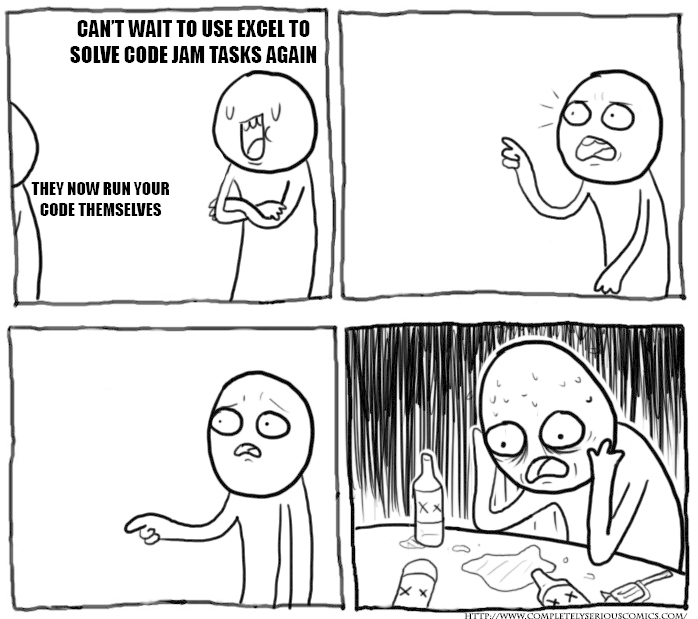 Helping Contestants Help Us All or Competition Pitfalls

By eduardische, history, 4 years ago,

During my competition history I've collected a vast amount of different fail stories. And those usually come in two flavours. You either get an aftertaste of a personal failure or you get a feeling that you were helped by organisers in your adventure. And it's always helpful to try and learn something from these failures. The first ones are kind of personal, and only affect you or your team, so they are not that interesting to talk about. The second ones however are more important. First of all, this is a direct feedback to the organisers, in hopes that it might make future contest better. And then you usually try to use that feedback yourself when you move on the organisers side in an attempt to make sure that you avoid setting all those pitfalls that you were annoyed about when competing. So here I'm going to try and describe two types of pitfalls that in my opinion the organisers can deliberately or accidentally set that helps teams to embark on a wonderful journey to fail-land a lot easier. This was originally intended to be a comment about Bubble Cup problem set, but since I've realised that the problemset contained great examples for both of these pitfalls, I've decided to post it separately to enable discussion.

By eduardische, history, 4 years ago,

The results of IOI 2016 have now been approved by the GA and are now available.

By eduardische, history, 5 years ago,

The number of contestants and cutoffs have now been confirmed at GA, so here are the results of IOI 2015.

By eduardische, history, 5 years ago,

Not that I have any chance of going to onsite finals but does TopCoder expect that all TCO 2015 Round 3 advancers request a visa invitation letter just in case?

The data is obtained from the IOI registration system and is accurate at the time of writing. Should any changes/additions occur, I will try to update them in the timely manner.

Where applicable, the photos of the participants of IOI 2015 are also available. Note that permission is required in the registration system to publish any contestant's photo, so where no permission was granted, either a photo from previous IOI(s) was used or no photo is available at all. Again, more permissions may be granted in the future and I will try to update them in the timely manner.

Finally, I have also pulled Codeforces handles from a thread by EXM_KG. I would like to thank him for maintaining it. For the rest of contestants, please feel free to add those in the database if you have such knowledge.

By eduardische, history, 5 years ago, translation,

Is this a bug, feature or am I a Slowpoke (see first column)? If this is a feature and now contestants become unrated if haven't written a contest in a certain period of time, then what is this time interval?

So, the qualification round was upon us, and it's a nice way to have some fun. In the past two years I've been writing solutions in multiple languages. In both of them I used Excel for one problem. Without any use of VBA of course, as it would've been too boring. This year I decided to go nuclear and use Excel for everything. I managed to get 100 points. Here are the notes on this glorious experience.

By eduardische, 5 years ago, translation,

A reminder that today at 21:00 GMT the second round of Facebook Hacker Cup 2015 is taking place. After first round last weekend 732 contestants are continuing the battle. Top 100 from the second round advance to the third, while top 550 receive T-shirts. The round will be 3 hours in length. For contestants the tasks will be available here, while the standings — here.

UPD: Round is over, provisional results have been published. Cutoffs:

By eduardische, 5 years ago, translation,

Today i stumbled upon this post. In this case, judging from comments, I can guess the original contents of the post fairly well. However, the general idea got me thinking — why all the history of comments is preserved, while the history of posts themselves — don't?

IOI 2014 complete data is now available in the database.

The live video feed for IOI 2014 is now available.

Since IOI 2014 participant list was released in mobile app a couple of days ago, I have processed it and it is now available in IOI database.

Almost all Codeforces handles were also imported from thread by sylap97 — thanks to him for maintaining it!

Finally, the participant list now marks golds with 1st — 5th absolute ranks as such and sorts them appropriately.

UPD: It turns out that the information in the mobile app was incorrect/outdated. The database was updated. Contestant-wise, serious changes were made in teams from Colombia and Egypt.

By eduardische, 6 years ago, translation,

And while everyone is relaxing after TopCoder, I would like to remind that today at 21:00 UTC the Round 2 of Facebook Hacker Cup 2014 is taking place. It will run for 3 hours. Top 100 advance to Round 3 and get a T-shirt.

So, I've finally updated the functionality of IOI Database and now there is IOI 2013 with a status of future olympiad. So, no results and tasks. Also participations in future olympiads doesn't count to country statistics and hall of fame, until the olympiad is concluded. So, the list of IOI 2013 contestants is available here. It already includes all the contestants I've seen in CF threads with the exception of Czech Republic due to the submitter not knowing the team for sure. I will update the contestants from all 4 threads on CF (I would like to say 3, but someone will post the team here, even if I ask to not post any teams in this thread to keep this information on CF spreading to minimal amount of places. I'm asking now, by the way), but you can also add teams or edit handles (like TopCoder ones) directly in the database.

I would also like to note that the contestants table is also available for every past olympiad. And yes, it's still not full in some years.

Today (09.03.2013) at 14:00 UTC the sixth (the last regular) contest of the Croatian Olympiad in Informatics. takes place. You can login/register here. Duration: 3 hours. Good luck!

Since I have now both participated in NEERC and NWERC, I have my personal opinions comparing the two semifinals, which I want to share.

Before I actually participated in NWERC, I always thought that advancing from NEERC to the World Finals is harder than from most of the other regions, because there are a lot of really good teams in NEERC. Now I'm thinking otherwise. If there are only 2-3 advancing teams then, in my opinion, a lot more luck is involved. I mean, I could see it from my own example — we had a very good start, leading for half of a contest, including freezing, but haven't solved one easy task in the end, and that was it and we dropped down to 4th — so a single fail is enough to fail all the contest. Yes, of course, I'm not trying to blame anyone for our own fails, but still it was just a single crucial fail. I'm pretty sure every year there are some teams, that had made that one mistake, and as the result are left out of World Finals. Now, at NEERC, because the quota is so big, if you're really fighting for the finals, you're allowed to make some crucial mistakes, and still qualify. Like my team did last year, for example, we had so many places that we thought we could get a lot better, and we still qualified. Again, this is all coming from my personal experience, but I believe that there are quite a considerable amount of teams suffering from this every year.

Hence, why do we even have such small semi-finals like NWERC, SEERC etc.? Why don't we unite some semi-finals, so that from each semi-final a reasonable amount of teams advances (like 10-15). This, in my opinion will give more fairness if united regions are balanced correctly.

Although I'm still writing it under the effect of yesterday contest, I would like that this post is viewed as a place for discussion of this what is my opinion is a problem. I hope that this is not viewed as merely a rant.

By eduardische, 8 years ago, translation,

Recently I stumbled upon on a different method of grading the programs in programming — where instead of the time limit, instruction limit is used (the amount of assembler code instructions CPU has done). That was the first time I've stumbled upon it and have never before seen system like it.

Hence, I am very interested in hearing opinions about what are the advantages and disadvantages of this method. From a quick overview, there is a massive advantage because amount of instructions isn't dependable on the performance of CPU. Again, from a quick overview I couldn't see any massive disadvantages, but because I've never worked with it before, I would love to hear the opinions of community. Maybe someone has already dealt with this approach.