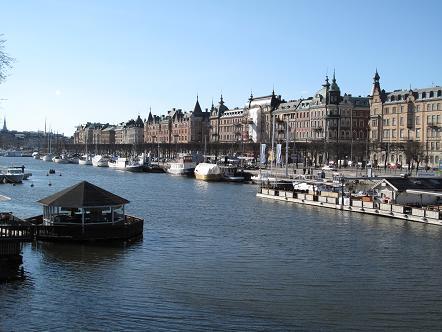 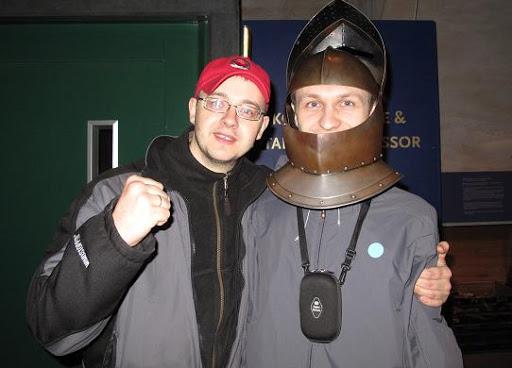 As for the weather conditions, the meeting with Stockholm was not that warm as we expected. The thing that struck the eye was how differently people from different countries bore the northern climate. The team from Egypt wrapped themselves in coats, evidently bought there, as the volunteers from the Royal Technological University spent hours in T-shirts under the open sky.

Traditionally the contest itself takes one day and lasts for five hours. So, 21 April 2009 at 9 a.m. all the participants got together in the library of the Royal Technological University and waited for the beginning. It's always a very tense and stirring moment. Count down: three, two, one - the contest is started! The participants opened the envelopes with the tasks. Last year the jury gave 11 programming problems.

One more peculiarity of the last World Finals was that the contest was broadcast to the teams' trainers and instructors, and on the local TV. During the broadcast the history of  ACM-ICPC was told, some interviews were taken, and of course, it was told how the final was going.

The first problem was solved by the Waterloo University team (Canada) at the 10th minute of the contest. This team took the top position and held it for more than an hour. By that time they were the only team that had solved three problems. 11 teams, the Saratov State University included, had solved two problems. We solved the problems A and B at the 36th and the 65th minutes accordingly. By that moment our team were the 4th, giving way to the teams from the Waterloo University, the Saint-Petersburg State University (SPbSU), and the Saint-Petersburg State University of Information Technologies, Mechanics and Optics (SPbSU ITMO) and Of course, such an impressive beginning of our teams did not go unnoticed: in the broadcast the previous achievements of Russian teams were mentioned, including the victory of the Saratov State University at the International Collegiate Programming Contest in 2006.

The following hour of the contest was not that successful for our team. By the end of the second hour the Saint-Petersburg State University held the leading position, having solved four problems. The Saratov team held the 7th position with three problems solved. But several minutes after the beginning of the third hour, our team managed to solve the fourth problem and moved up to the 3rd position. The Saint-Petersburg State University was still the leader. That team had already shown good results at the Championship. In 2008 at the World Finals in Canada they took gold medals.

The following two hours were marked by the further success of the Russian teams - the SPbSU ITMO team solved one problem after another, and by the end of the fourth hour they had achieved leadership, having solved 7 problems. Our students were the third, having 6 problems solved.

An hour before the end of the contest, to enhance tension, they stopped announcing the results. The last hour was not broadcast, and the audience waited with their hearts leaping. Here is the top of standings by the end of the broadcast.

Russian teams occupying the three top positions impressed the audience. But there was the whole hour before the end, and it's not easy to hold the leadership. The Tsinghua University was one of the most powerful rivals. Having world-famous people as its members, this team was able to demonstrate a strong end play. As the leading teams had solved different problems, it was obvious that for each team there were problems it could solve during the last hour.

Several times we were taken to the balcony overlooking the hall, from where we could see the one hundred teams working on the tasks. About 40 minutes before the end our delegation noticed that our team reacted happily, having read something from the screen. Most likely, it was the solution to the seventh problem, but it was not for sure. Several times during the broadcast we were shown the Tsinghua University team rejoicing, which made us nervous. It was important for us to be among the top four, because the first four teams get the gold medals of the World Finals.

Last year (probably because of the broadcast) the results were announced almost right after the contest, before the official ceremony. The SPbSU ITMO team solved two problems during the last hour and proved their title of the World Champions. Our team solved two more tasks as well and took the 4th place and gold medals. The greatest achievement was made by the Tsinghua University, they solved three more problems and moved up to the second place. Thus, the results are the following: 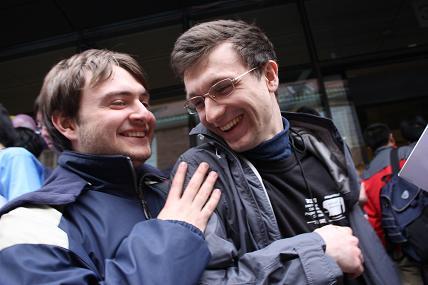 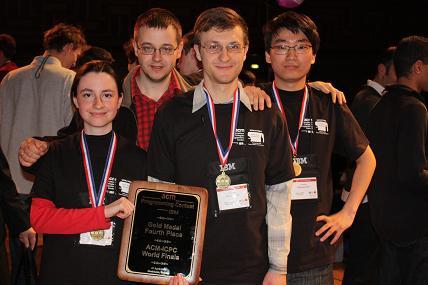 The closing ceremony was held in the Concert Hall of Stockholm, where the Nobel prizes are awarded every year. Gold medals were given to the members of the Saratov State University team: Natalia Bondarenko, Dmitry Matov, and Stanislav Pak. We are glad for our students and proud of them.