Today Saratov delegation will go to the championship's finals. As you remember, we've been planning to go to Sharm El-Sheikh since January, watching their great February revolution anxiously. As a result, the finals were moved to Orlando (Florida, USA). Our delegation got a little smaller too, as May is a hot month and it's a long way from Russia to the USA.

Our team is famous on Codeforces. And that's not surprising! Just look at them: 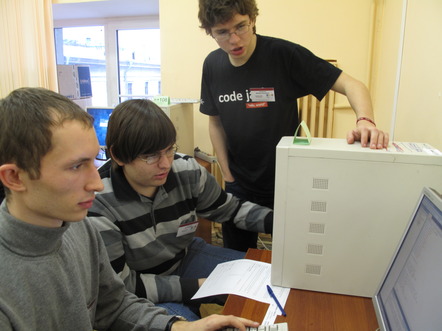 Besides, the team has me as the coach and Antonina Fedorova as the team leader.

I will do my best to keep you up to date on how the trip's going (mostly on the actual finals, of course). However:

I urge the participants of the event not to keep their interesting impressions hidden and bottled up. I want you to share them. For example, you can publish them on Codeforces!

As a conclusion to the entry, I want to ask a question to those who have already planned the whole trip. As far as I understand, the couple of days before the finals in Orlando won't be spent uselessly: there are some grand amusement parks around. I've got a question to those who are prepared and to those who are keen on that: which place will be most interesting for the ACM-ICPC team? As far as I understand, the tickets to those parks are not exactly cheap, but in one can get a discount now and then - how should we purchase the tickets?

Just in case I inform the Saratov residents that we leave today, on May 23, on train 9.