What's slower than a segment tree and needs some more space to be free ?

By DanAlex, history, 7 years ago,

It has been written about sqrt decomposition many times. Still, many people see as a poor cousin of segment trees. Even though segment trees are more frequent in practice and much faster, I think both of them have their own advantages. Comparing a tank with a Ferrari might not be the best metaphor, but it's still applicable to some extent.

Sqrt decomposition is straight forward and easy to understand and yet an useful tool. Playing with data structures might come more natural if you broaden your horizon. One might fight with sticks before using a sword. Though, one might skip stick fighting for some reason and still be an excellent swordsman. Still, fighting with sticks is badass, especially if you're a monk. ### A story about two eggs

First of all, let's forget about the fact that we have just 2 eggs. Suppose we have n eggs. Let's denote the verification function of an egg breaking down as f. That's how f works for the following example:

The egg will break down at 6-th floor. We can observe that f is a non-decreasing function. That means we can binary search on it. So, one might try to break an egg at 4-th floor , then at 6-th floor and finally 5-th floor.

Let's return to the original problem. You have now only two eggs. How useful is the strategy above ? Well, if the first throw leads to the egg cracking this will reduce our search to half of the stores. You might want to reuse the egg, so this suggests that you have to take a smaller step.

Take a closer look on how splitting the building in two halves work. First throw splits the interval in two, and the second one iterates through the interval. Try to do that with 2 throws with the first egg. So, split the interval in three ( one throw at N/3 , one at 2*N/3 ) and then iterate. Much faster , right ?

We only have left the generalisation of the concept above. But when we stop ? Let's denote X = length of the split. Well, first egg will be thrown N/X times , and the second one X times. Taking X = sqrt(N) will give as a number of O(sqrt N) throws. And that is a little example of what is yet to come.

Note the problem above was used for explicative purposes. For the general case problem look here .

You are given an array of length n. Answer to m query of types:

The brute force goes like that: we shall iterate from x to y for each query and compute the answer. The update will be O(1) and query O(N). That is O(N*M).

Finally , having all this stuff sorted out , I'll present you the final solution.

Here is an (object oriented) approach to implement the problem above.

You can also read more about the basics (and other stuff) here .

You are given an array of length n. Answer to m query of types:

The only thing we must keep in addition is a variable ff that works as follows:

It works just as lazy deletion on segment trees. That is, if we need to look for a value inside a k-segment then is the segment is fixed we update all it's elements with ff. If we need to compute the maximum on a fixed segment is not necessary to go inside it, but rather just respond with value ff. Complexity will be O(N+M sqrt N).

Sometimes taking K=sqrt(N) isn't the best idea. It was the case the following problem form National Olympics in Informatics Romania.

Firstly , let's solve the problem in a not-so-good complexity. We binary search the result, making a greedy verification function. As long as one can expand the current continuous sequence to the right side ( i.e. [(maximum-minimum+1)/2] <= binary_searched_value ) , we move to the right. If we can split the array in m or less sequences, the verification function will return true. The complexity will be O(N log max_ans).

Now we have to improve the complexity of some verification. We split the array in k-sequences ( of length k ). For each sequence keep maximum and minimum. Now, instead of trying to add only one value to the sequence we can try to add k values to it. This will give us the complexity O(N/K+M*K) per verification as we have maximum N/K “full” k-segments to be added and we start to add a new continuous segment to the solution at most M times.

The solution that uses sqrt decomposition splits the queries in groups of k = sqrt(q). Now let's solve the problem for each group of queries.

First of all , let's compress all the nodes that we are not interested in. That is we keep all edges instead of edges in all queries in the current bunch and make a new node for each conex component in this graph. The new graph will have only nodes and no edges.

To be sure you understood, let's take a quick example. In the picture the edges marked with red are the first query and the ones with blue are the second one. Suppose we make a bunch out of queries 1 and 2. 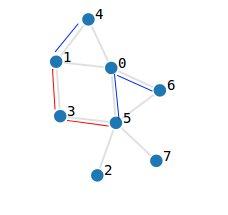 You can find a similar problem here .

Even if I initially planned to include one more problem, I wanted to finish the article before moving to London, so here it is. ( I might do that if I have enough time next month ) The next tutorial will probably come in the second half of October.

Please state your opinion on my tutorial. ( or, more specifically, on my writing style and how useful you find the material presented ) Also, if you have any suggestions on what the next tutorial should be on, feel free to comment. Moreover, if you demand a more specific topic is much likely I would choose it before a larger topic. ( e.g. segment trees would be more likely then data structures )

The possible mistakes will be fixed on Tuesday. You can find my previous article here.