Hello Codeforces! Some months ago I wrote tutorial about basics of recurrent sequences. This blog, my second tutorial is about mine another favorite topic — Invariants and Monovariants. These are useful concepts which will help you solving problems, especially, constructive ones. Even if you are not familiar with this topics, I'm sure that you solved problems with use of invariants and monovariants without knowing it, continue reading, you will understand my point :) There will be hard problems which are based on old IMO problems, so I will try my best to explain solutions of examples.

Let's start with a few easy examples which you will better understand its point. I suggest you to try solving problems by your own before reading solution. Example 0.1: All numbers from 1 to 100000 are listed in the board. For each number in this board, we replace that number with its sum of digits while resulting number is bigger than 9. At the end, obviously, all numbers will be in range of [1, 9]. Determine which is bigger, number of 1's in new sequence or number of 2's?

Remark: As you can see from this problem, there is no very special things in invariant. We used being even of 2 * x as invariant. In next example, we will solve harder problem, which it can be used as competitive programming problem. 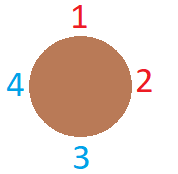 We want to rearrange that positions with moves such that people with same color will not be neighbor. For that, we simply reverse [2, 3] taken clockwise order. New positions will be: 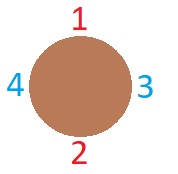 Which satisfies our condition.

Solution 0.3: We will prove that that finite list of moves are always exists. Let A and B be enemies who are neighbor, for simplicity, consider A is on the left side of B (in aspect of B). 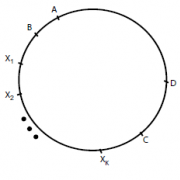 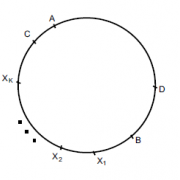 Remark: Did you see that problem on any judge before? If yes, please write it in comments, otherwise I'm planning to put this problem in SPOJ. Now, we have one more interesting problem, but without solution :) Try to solve it and share your solution with us in the comments. 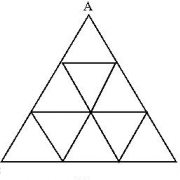 Now, we will move to more advanced problems. Next problem is one of the my favorite problems in this topic.

Example 1.1 [Based on IMO shortlist 1989]: A natural number is written in each square of an mxn chessboard. The allowed move is to add an integer k to each of two adjacent numbers in such way that non-negative numbers are obtained (two squares are adjacent if they share a common side). Check if we can make all numbers 0 after finitely many moves (Numbers written on chessboard are given, and we can choose k any number which will not violate given rules).

Solution 1.1: In our problem, it gives us "chessboard" word which is very big hint as chessboard is colored in 2 colors. It could say just board, and it would be harder problem as we would color board in 2 colors (it is called Coloring technique in combinatorics). So, why it is big hint? Let's see. In each move, we are adding the same number to 2 squares, one of which is white and one of which is black. If Sb and Sw denote the sum of numbers on black and white squares, respectively, then Sb - Sw is an invariant, because change of both Sb and Sw is same. Thus if all numbers are 0 at the end, Sb - Sw = 0 at the end and hence Sb - Sw = 0 in the beginning as well. This condition is thus necessary; now we will prove it is also sufficient which will solve problem. Suppose a, b, c are numbers in cells A, B, C respectively, where A, B, C are cells such that A and C are both adjacent to B. If a ≤ b we can add  - a to both a and b, making a 0. If a ≥ b, then add a - b to b and c. Then b becomes a, and now we can add  - a to both of them, making them 0. Thus we have an algorithm for reducing a positive integer to 0. Apply this in each row, making all but the last 2 entries 0. Now all columns have only zeroes expect the last two. Now apply the algorithm starting from the top of these columns, until only two adjacent non-zero numbers remain. These last numbers must be equal since Sb = Sw. Thus we can reduce them to 0 as well. Also, we can print list of moves with this algorithm.

Example 1.2 [Based on IMO shortlist 1994, C3]: Peter has 3 accounts in a bank, each with an integral number of dollars. He is only allowed to transfer money from one account to another so that the amount of money in the second one is doubled. Check if Peter can transfer all his money into two accounts. If so, print list of transfer.

Solution 1.2: We will prove it is always possible and provide algorithm for transferring money. Let A, B, C with A ≤ B ≤ C be the number of dollars in the account 1, account 2 and account 3 respectively at a particular point of time. If A = 0 initially, we are done so assume A > 0. As we perform any algorithm, the values of A, B and C keep changing. Our aim is to monotonically strictly decrease the value of min(A, B, C). This will ensure that we eventually end up with min(A, B, C) = 0 and we will be done. Now, we know a very simple and useful algorithm that monotonically reduces a number — the Euclidean algorithm. So let B = qA + r with 0 ≤ r < A. Our aim now is reduce the number of dollars in the second account from B to r. Since r < A, we would have reduced min(A, B, C), which was our aim. Now, since the question involves doubling certain numbers, it is a good idea to consider binary representations of numbers. Let q = m0 + 2m1 + …. + 2kmk be the binary representation of q, where mi = 0 or 1. To reduce B to r, in step i of our algorithm, we transfer money to account 1. The transfer is from account 2 if mi - 1 = 1 and from account 3 if mi - 1 = 0. The number of dollars in the first account starts with A and keeps doubling in each step. Thus we end up transferring A(m0 + 2m1 + …. + 2kmk) = Aq dollars from account 2 to account 1, and we are left with B–Aq = r dollars in account 2. We have thus succeeded in reducing min(A, B, C) and so we are done.

I have one more interesting problem, again without solution. It is easier than 1.1 and 1.2, so I believe you can solve it by yourself! Anyway, I added hint in spoiler :)

Example 1.3: Several positive integers are written in a row. Iteratively, Alice chooses two adjacent numbers x and y such that x > y and x is to the left of y, and replaces the pair (x, y) by either (y + 1, x) or (x - 1, x). Prove that she can perform only finitely many such iterations.

Prove that maximum of the numbers written is invariant.

Thanks for Kerim.K for providing us following problem and solution with invariant. I let you to solve this problem by your own.

UPD Example 1.4: There are n numbers on the board. In each move, Kerim selects two numbers (let them be a and b) and writes

instead of them (that is, he deletes a and b and writes given number). After n - 1 moves, there will remain just one number. If all n numbers were 1 in the beginning, prove that last number will remain after n - 1 moves is greater or equal than 1/n.

So, it is end of tutorial. Hope you learned many things from this. If you have and doubts or suggestion, please declare it on comments. Thanks to AoPS for containing IMO shortlists and Pranav A. Sriram for his book "Olympiad Combinatorics".