If all elements in the array are equal, there's no solution. Otherwise, sort the array. The sum of the second half will indeed be greater than that of the first half.

Another solution is to see if they already have different sums. If they do, print the array as it is. Otherwise, find any pair of different elements from different halves and swap them.

Notice that you can only swap 2 elements if they have different parities. If all elements in the array have the same parity, you can't do any swaps, and the answer will just be like the input. Otherwise, let's prove you can actually swap any pair of elements. Assume you want to swap 2 elements, $$$a$$$ and $$$b$$$, and they have the same parity. There must be a third element $$$c$$$ that has a different parity. Without loss of generality, assume the array is $$$[a,b,c]$$$. You'll do the following swaps:

In other words, you'll use $$$c$$$ as an intermediate element to swap $$$a$$$ and $$$b$$$, and it'll return to its original position afterwards! Since you can swap any pair of elements, you can always sort the array, which is the lexicographically smallest permutation.

Let's call the maximum value in the array $$$max$$$. Let the number of primes less than or equal to $$$n$$$ be called $$$p$$$. Then, $$$max \ge p$$$. That's true because a distinct number must be assigned to each prime, since all primes are coprime to each other. Now if we can construct an answer wherein $$$max=p$$$, it'll be optimal. Let's first assign a distinct number to each prime. Then, assign to every composite number the same number as any of its prime divisors. This works because for any pair of numbers $$$(i,j)$$$, $$$i$$$ is given the same number of a divisor and so is $$$j$$$, so if they're coprime (don't share a divisor), they can't be given the same number!

Let's call the permutations from the statement good. For starters, we'll try to find some characteristics of good permutations. Let's call the first element in a good permutation $$$s$$$. Then, $$$s$$$ must have the maximal possible number of prime divisors. Also, every time the $$$gcd$$$ changes as you move along prefixes, you must drop only one prime divisor from it. That way, we guarantee we have as many distinct $$$gcd$$$s as possible. Now, there are 2 important observations concerning $$$s$$$:

Assume that your search scope is the subtree of some node $$$u$$$ (initially, $$$u$$$=1). How can we narrow it down efficiently? I'll pause here to add some definitions. The heavy child of a node $$$a$$$ is the child that has the maximal subtree size. The heavy path of node $$$a$$$ is the path that starts with node $$$a$$$ and every time moves to the heavy child of the current node. Now back to our algorithm. Let's get the heavy path of node $$$u$$$. Assume its other endpoint is node $$$v$$$. We know that a prefix of this path contains ancestors of node $$$x$$$. Let the deepest node in the path that is an ancestor of node $$$x$$$ be node $$$y$$$ (the last node in this prefix). I'll now add a drawing to help you visualize the situation. 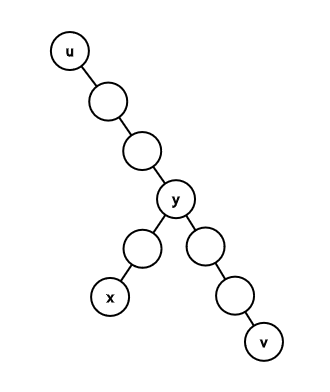 Another way to find y