Here is a playlist of all hybrid tutorials I've done.

Hi! Definitely not inspired by this comment, I've decided to try something that seems relatively novel — combining a blog and video tutorial into one, in a "hybrid" fashion. Both should be usable independently, but they will have the same "flow" and structure so you can reference both for concepts that are harder to grasp, and the two will supplement each other. The goal of these is to be complete — beneficial for both video and blog lovers, as well as full of enough information that anyone without much of an idea of what the concept is should be able to fully understand. There will be code as well, however, I very highly recommend not looking at it, but rather working out the implementation for yourself.

The concept of this tutorial is heavy-light decomposition. This one isn't 100% fair, as I'm basically copy-pasting one of my old tutorials that can be found here and adding a video component, but it's never been on Codeforces before.

The full video can be found here.

Heavy-light decomposition is kind of a scary name, but it's really cool for what it does. Take some classic segment tree problem with two types of queries:

Now, anyone familiar with a segment tree will recognize that it can be easily applied to solve this. But what if we moved the problem from queries on an array to queries on a tree? Let's reformulate the queries to be:

which is exactly this problem from USACO, and the problem I'll be using as an example for the rest of this tutorial. To note, its editorial also provides a nice description of HLD.

This is a relatively advanced topic, and this tutorial is not meant for beginners. Before reading this blog, you should know: 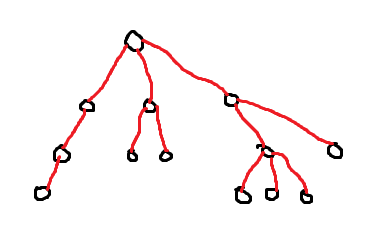 What we're going to do is, for each vertex that isn't a leaf, find the edge that leads to the child with the largest subtree (breaking ties arbitrarily). I'll color these edges green: 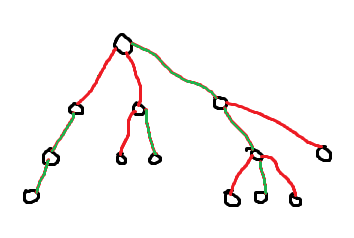 (blame MS Paint for the colors looking weird). We'll call these special edges "heavy" edges (because they lead to the "heaviest" child) and the rest of them "light" edges. This turns out to be super nice to work with because the heavy edges always form "vertical chains" — paths that go from some vertex to an ancestor of it. Brushing aside the implementation for a second, let's assume we've built a segment tree on each of these vertical chains. Now the key idea about this setup is that any path on the tree will pass through at most $$$O(\log{n})$$$ light edges. By extension, each path also passes through at most $$$O(\log{n})$$$ vertical chains.

Cool. Now, since each path goes through at most $$$O(\log{n})$$$ light edges and heavy chains, we just need to quickly evaluate all of these. Light edges are single edges, so we can get their vertices' values quickly. As I said before, if we build a segment tree on each heavy chain, then we can evaluate the value of the intersection between our path and each heavy chain in $$$O(\log{n})$$$. Thus, the total complexity is $$$O(\log^2{n})$$$ per query.

This is the fun part. I'll break this up into sections. The tree is always rooted arbitrarily (at 0).

The value p denotes the parent of the current vertex v — I avoid infinite loops by avoiding re-visiting the parent. d is the current depth.

Building a segment tree on each heavy chain

For convenience (so I or someone else can stick a segment tree template in), I choose to use a single segment tree for everything and label the nodes so heavy chains end up together in the labeling. We do a dfs and label nodes in the order that they're visited. The simplest way to achieve labeling like what we need is to visit big children before everything else, then the label of each big child will be exactly 1 greater than that of its parent. Here's what this would look like on the tree above: 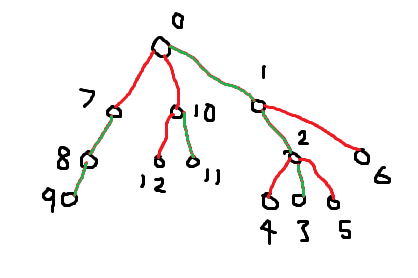 As you can see, for this tree (and all other trees), the labels on heavy chains form consecutive sequences of numbers, so they can be easily queried with the segment tree.

Initially label_time is set to 0. The function seg_update_header is simply a wrapper for the update function in my segment tree, and that call to it sets the position at label[v] to arr[v].

Now our goal is to compute, for each vertex, the vertex at the top of the heavy chain it belongs to (which could be itself). This can be done in a DP-like fashion going down the tree. We set $$$chain[i]$$$ to:

because if $$$i$$$ is a light child, then there's clearly no heavy chain above it, and otherwise, it just continues the heavy chain from its parent.

Now that we have that vertex, we need to make sure we don't accidentally include the LCA or vertices above it in the query. We can do that by checking each time, if $$$depth[chain[v]] \leq depth[lca(u, v)]$$$. Once this is true, we set our top node (which would usually be $$$chain[v]$$$) to the vertex directly below $$$lca(u, v)$$$, which automatically means we stop next iteration since we reach $$$lca(u, v)$$$.

get_kth_ancestor is done with binary lifting and defined in the full implementation. Its function is to just get the $$$k$$$-th ancestor of the input vertex. seq_query_header is the query function for my segment tree.

To get the answer for the full query, we combine the answers for the two vertical chains and, additionally, include the LCA.

lca is done with binary lifting and defined in the full implementation.

This is exactly the same as computing a query, but replace seg_query_header with seg_update_header.

The implementation specifically applied to the USACO problem (submitting that exact code will give AC) is here. An implementation with just the HLD is here. Some more details follow.

Note: This implementation is by no means optimized in terms of constants. Of course, the asymptotic complexity is the expected $$$O(\log^2{n})$$$ per query, but there are many things that can be improved. I'll leave these optimizations as a task for you.

How to initialize it

And you're done! Now you can call query and update with the endpoints of paths (also $$$0$$$-indexed).

Most of the stuff will work on its own, you won't have to worry about it. I've marked out a section that should be changed depending on the problem — such as segment tree combination (in the case of the USACO problem, xor), sentinel values, and how to handle lazy propagation. Of course, feel free to replace this with your own segment tree.

The value of size in the template should be at least as large as the arrays will ever have to get, and lg should always be greater than $$$\log_2{(size)}$$$ for binary lifting purposes. seg_t is used all over, and is essentially the data type that should be used for queries, updates, and general segment tree operations. Usually, it can be long long, but if speed (or memory) becomes an issue you can make it int or something else as well (including custom data types, like matrices and stuff).

Edge (instead of vertex) queries/updates

We can easily modify this HLD to work with edge queries instead of vertex ones. What we can do is, we can leverage the property that each vertex except the root has an edge going up to its parent. That means we can use the values in each vertex to represent the edges going from them to their parents without modifying most of the code. This only requires two real slight changes:

First tested on the USACO problem, linked above.

I also used my HLD to solve this problem (solution link), which you can try as a challenge if you want. To my surprise, it ran rather quickly!

You can use the above two problems as well as:

Note that these are not ordered by difficulty (if they were, it would be a bit of a spoiler) and that HLD may not necessarily be the best/simplest solution to these problems, but it's possible to solve these with it. Also, feel free to suggest more practice problems, as I don't really know where to find them.

edit: Continuing with the relatively advanced graph algorithms (as well as the "decomposition" techniques), the next topic will be centroid decomposition. I'll publish it sometime this or next week.