By Monogon, history, 2 years ago, 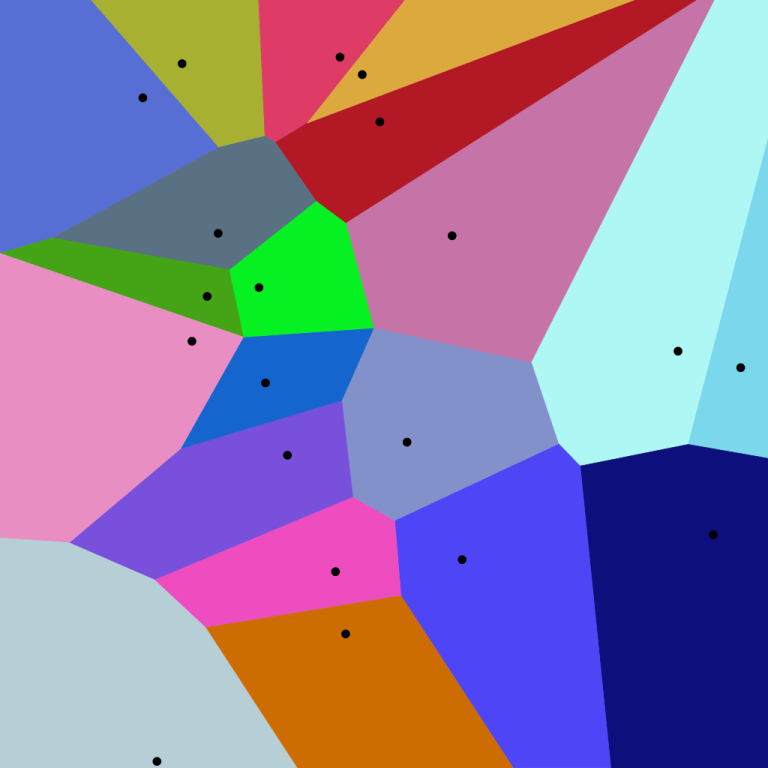 The Voronoi diagram can be represented by the planar graph of boundaries between regions. A vertex in this graph is where three or more segments meet (or a point at infinity), and an edge is a segment connecting two of these vertices. The way the regions were defined, we see that a segment contains the points equidistant to two points in $$$S$$$, so it is part of their perpendicular bisector. Similarly, a Voronoi vertex is equidistant to three or more vertices in $$$S$$$, so it is their circumcenter. Recall that the circumcenter is the intersection of perpendicular bisectors. 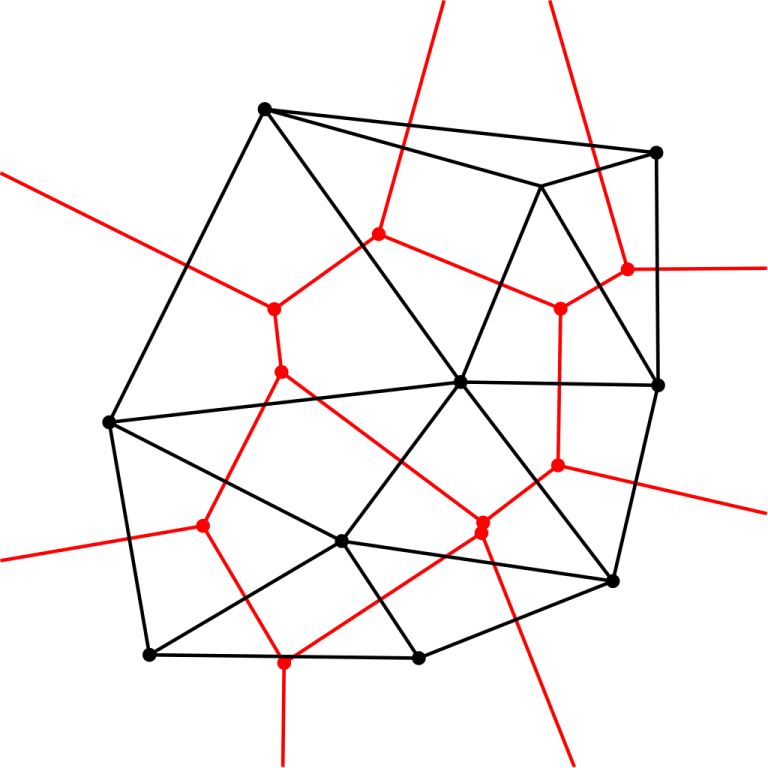 Why are these useful?

Other than this, the Delaunay triangulation has many amazing properties of its own that can make it extremely useful for solving problems.

Because this is geometry, there are some degenerate cases I have hidden from you up to this point. The first case is when all the points in $$$S$$$ are contained in a line. In this case, the Voronoi diagram has all edges connecting two points at infinity, and the Voronoi diagram is disconnected (in all other cases it's connected). Also in this case, the dual graph is no longer a triangulation. We may still decide to represent it by the path of edges connecting the points.

Many algorithms exist to compute the Delaunay triangulation and/or Voronoi diagram of a set of points. Each have their advantages and disadvantages.

In this approach, you always maintain the Delaunay triangulation of a subset of the points and insert the points one at a time. When a point is inserted, you should delete all triangles whose circumcircle contains the newly added point. After deleting this connected set of triangles, you should repair the face it exposes. For each edge in this exposed face, you should add a triangle with that edge and the new point. This gives the straightforward $$$O(n^2)$$$ Bowyer-Watson algorithm.

If we insert the points in a random order, we can significantly reduce the number of triangle insertions and deletions. But to get expected $$$O(n\log n)$$$ runtime, we would need to avoid processing all the unaffected triangles. And this makes the implementation far more challenging. We need to maintain a search structure of the triangles in order to locate which one contains the new point.

The advantage of this method is that it achieves expected $$$O(n\log n)$$$ runtime with only integer computations, and the construction is online. The disadvantage is that it has a bad constant, isn't deterministic, and the triangle search structure can make for a tricky implementation.

The divide and conquer algorithm first sorts the points by $$$x$$$-coordinate. Then it splits the points into two sets, recursively computes their Delaunay triangulations, and merges them together. As long as you can perform the merge in $$$O(n)$$$ time, the overall algorithm is $$$O(n\log n)$$$. When merging the triangulations, it is actually quite hard to keep track of the important adjacency information. The most popular strategy is perhaps the Quad-Edge data structure.

The advantage is that this gives a deterministic $$$O(n\log n)$$$ algorithm with only integer computations. The disadvantage is the complexity of the quad-edge data structure and the costly memory usage that comes with it.

My previous blog on 3D convex hull gave an $$$O(n\log n)$$$ randomized incremental implementation, but it turns out to have quite a bad constant for practical use.

In this blog, I will focus on Fortune's Algorithm. It takes a sweep-line approach to the problem, and achieves a deterministic $$$O(n\log n)$$$ time complexity. The main disadvantage is that computations are done with floating points instead of integers, opening up the door to precision errors. However, keep in mind that the algorithms using only integers have a risk of integer overflow even on reasonably small constraints.

We are ready to understand Fortune's algorithm abstractly. We scan a sweep-line from left to right, maintaining the combinatorial structure of the beach line. The parabolas are only for visual aid, and the ordered list of foci is what is actually stored. As points get added and parabolic arcs shrink to length $$$0$$$, these events tell us precisely the structure of the Voronoi diagram and Delaunay triangulation.

There are two types of events which change the beach line structure: point events and vertex events.

My code doesn't work when two points have the same $$$x$$$ coordinate. This is handled simply by rotating all input points by $$$1$$$ radian and praying to the geometry gods.

We must pick a point on the circle's circumference that intersects with the best Voronoi region. The Voronoi diagram divides the circle into $$$O(K)$$$ segments. It's sufficient to check a point from each segment.