In computer science, 2-satisfiability, 2-SAT or just 2SAT is a computational problem of assigning values to variables, each of which has two possible values, in order to satisfy a system of constraints on pairs of variables. It is a special case of the general Boolean satisfiability problem, which can involve constraints on more than two variables, and of constraint satisfaction problems, which can allow more than two choices for the value of each variable. But in contrast to those more general problems, which are NP-complete, 2-satisfiability can be solved in polynomial time. -Wikipedia

If you have not heard of propositional logic before, plead read about it here. Wikipedia links have been provided wherever a term has been used for the first time in this tutorial. The whole algorithm is based on graph theory so it will help to be familiar with directed graphs and strongly connected components beforehand.

By representing our formula in the 2-Conjunctive Normal Form, we can find an assignment of values for our variables in $$$O(N + M)$$$ where we have $$$N$$$ variables and $$$M$$$ clauses or report that the proposition isn't satisfiable. Simply put, a formula in the 2-CNF is an AND of ORs where each clause contains exactly two literals.

Thanks to Monogon for providing valuable suggestions and helping with the proof.

2-CNF consists of a bunch of OR clauses combined with AND. Each OR clause must result in $$$\it{true}$$$ for a proposition to be satisfied.

We want to create a directed graph of implications where each node is a variable.

Here is what the graph looks like for the following proposition in 2-CNF: 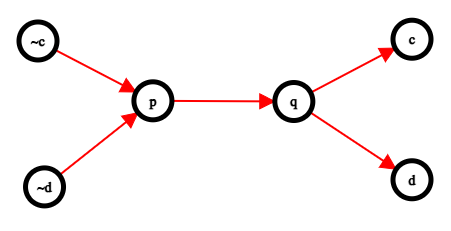 Shown above is the implication graph and its condensation graph.

After we have added all the required edges, we want to find all the strongly connected components in the graph. The condensation graph is acyclic (graph obtained on compressing each SCC into a single node but retaining connections). Visualise this as a graph where SCCs are connected to each other with edges directed from left to right (as shown in the diagrams above).

When that is not the case, we can assign values to all variables.

An important observation is that all variables in a SCC have the same truth value.

This way, we can satisfy our proposition in linear time.


Why Does It Work?

Keep in mind that:

After we figure out the clauses that need to be added and set up the graph adjacency list, we need to extract all strongly connected components (using any algorithm keeping in mind its efficiency). Kosaraju's algorithm or Tarjan's algorithm is commonly used to extract strongly connected components. I use Kosaraju's algorithm in my implementation below. We want to give each SCC an ID and store for each node which SCC it belongs to. Variables can be numbered from $$$1$$$ to $$$N$$$ and their complements can be numbered from $$$N + 1$$$ to $$$2N$$$. So $$$i + N$$$ is $$$i$$$'s complement.

Try to solve this problem on your own.

Though this problem asks only whether it is possible to place the cards in such a way that no two cards are showing the same picture, try to find a valid arrangement as well.

For each integer $$$x$$$ from $$$1$$$ to $$$2N$$$, we want to store the indices of all the cards which have $$$x$$$ on any side, along with which side they have it on. Now our problem is the following: add implications in such a way that at most one card from each list is turned to the side which has that integer on it.

This way, we can solve this problem in linear time. See the code below to understand this better.