By brunomont, history, 14 months ago,

In this blog I will describe yet another useless unconventional data structure. This time, I will show how to maintain an extended suffix array (suffix array, inverse of suffix array, and $$$lcp$$$ array) while being able to add or remove some character at the beginning of the string in $$$\mathcal{O}(\log n)$$$ amortized time.

It can be used to overkill solve problem M from 2020-2021 ACM-ICPC Latin American Regionals, which my team couldn't solve during the contest. I learned it from here (Chinese), but it is not shown how to maintain the $$$lcp$$$ array.

Here is the whole code of the data structure. To read this blog, I recommend you ignore this code for now, but use it if you have questions about helper functions, constructors, etc, since I will pass over some implementation details in the explanations.

I will assume the reader is familiar with the definition of suffix array ($$$SA$$$) and $$$lcp$$$ array. If that is not the case, I recommend learning it from Codeforces EDU. 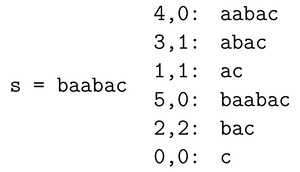 We could represent this using the following binary search tree. 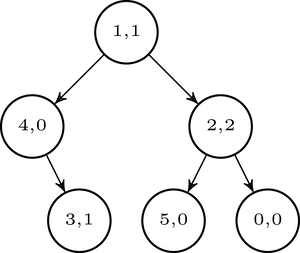 Because we want to maintain the $$$tag$$$ array, we will not use a binary search tree that does rotations, since it not trivial how to update the $$$tag$$$ values during the rebalancing. Instead, we will use a binary search tree called Amortized weight-balanced trees (see below for references). The idea of these trees is that, at any point, every subtree will be $$$\alpha$$$-balanced for some $$$0.5 < \alpha < 1$$$, which means that for every subtree rooted at node $$$x$$$, $$$\max(\text{size}(x.left), \text{size}(x.right)) \leq \alpha \cdot \text{size}(x)$$$. It turns out that if we insert and delete using trivial binary search tree algorithms and, after every change, for every node that is not $$$\alpha$$$-balanced we simply rebuild the entire subtree rooted at that node so that it becomes as balanced as possible, the height of the tree and the amortized cost of inserting and deleting is $$$\mathcal{O}(\log_{\frac{1}{\alpha}} n)$$$. Proving this is beyond the scope of this blog. In the code, I use $$$\alpha = 2/3$$$.

This rebuilding scheme makes it easy to maintain the $$$tag$$$ values by having a large enough interval of possible values (I use $$$[0, 10^{18}]$$$) and recursively dividing it in half (refer to the code for more details).

Code for ISA, SA and lcp

Since we add or remove characters at the front of the string, we only add or remove a single suffix of the string (and, equivalently, a single node in the binary search tree), and the previous suffixes remain unchanged and maintain their relative order. Below we see represented in red what changes in the $$$SA$$$ and $$$lcp$$$ after adding $$$b$$$ to $$$aabac$$$. 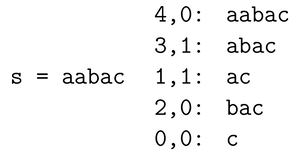 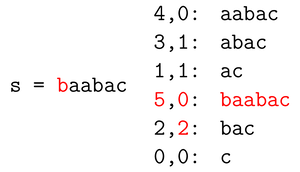 3.1. Comparing the new suffix with another suffix

If we can compare the new suffix with any other suffix, we can use this to go down the tree and figure out the position we need to insert the new suffix. To make this comparison, we use the following trick: we compare the first character of the suffixes. If they are different, we know which one is smaller lexicographically. If they are the same, then we end up with a comparison between two suffixes that are already in the tree, and we know how to compare them! Just use their $$$tag$$$ value.

Code for inserting a new suffix

Removing a suffix is relatively straightforward: go down the tree, using the $$$tag$$$ array, to find where the suffix we want to remove is. When found, just remove it using standard binary search tree algorithm.

Code for removing a suffix

I only know of one problem that makes sense using this data structure to solve it.

Note that the answer is $$$\sum_{i=1}^{n-1} \max(0, lcp[i] - lcp[i-1])$$$. Also note that this value is the same for the reversed string, so we can do the updates in the beginning of the string, instead of doing them in the end. Now we simply maintain this sum, and for every added character we push the new value in a stack. It is easy to update the sum for adding a character, and for removing a character we just pop from the sack.

This data structure is relatively simple, and yet very powerful. Not even suffix trees and suffix automaton, that can update their structure with character additions, are capable of rollbacks without breaking their complexity. So this scores yet another point for suffix arrays being the best suffix structure.

This data structure is not too fast, but it is not super slow either. It runs in about 3 times the time of my static $$$\mathcal{O}(n \log n)$$$ suffix array implementation.

I would like to thank arthur.nascimento for creating the problem 103185M - May I Add a Letter?, which made me look into this data structure. Also tdas for showing me the existence of it.

Explanation of the data structure (without maintaining the $$$lcp$$$ array) (Chinese): Link