Codeforces Round #741. How contest author is entertaining.

By Wind_Eagle, 9 months ago, translation,

Hello, Codeforces! Not too long ago there was my second round, Codeforces #741 (Div. 2). Before it started, I wondered: surely there will be a lot of cheating on my round, just like on any other? So I decided to do something unusual.

As you know from a blog about cheaters, it's easy to find telegram/youtube channels with cheaters. So I decided to find a couple and join them...

So, the first telegram group I found was [link not available yet]. There weren't too many cheaters in it but they were, here's an example: 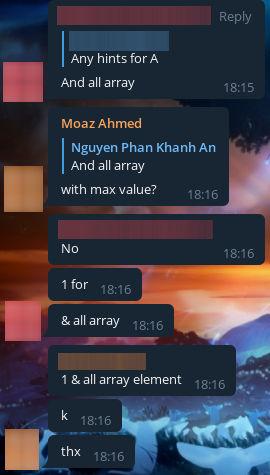 I joined this telegram group, and there was a meaningful dialogue: 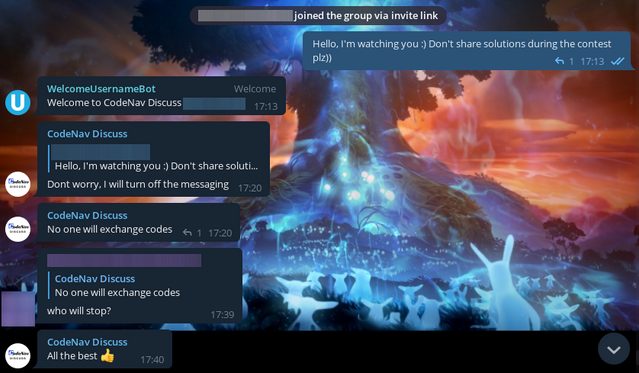 This may seem unbelievable, but the admin of the group actually banned participants from texting for the duration of the contest! So, I've already had at least some impact on the level of cheating during my contest. By the way, this channel published a couple of videos on my 1562A, 1562B and 1562C editorials. Pretty good ones, by the way.

The second group I found was probably the largest group with cheaters on telegram: [no link yet]. I repeated the procedure:

However, this group ignored my appearance! And continued, as if nothing had happened, exchanging solutions in private messages or somewhere in discord: 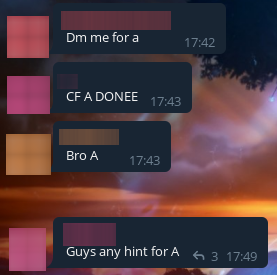 A little later, they even wrote half the solution for problem 1562A: 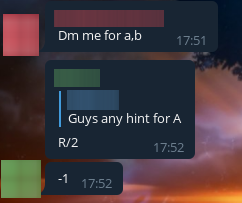 Some famous user came to my rescue:

As you can see, the practice of swapping solutions is extremely popular in the cheat community (give me a B and I'll give you a C): 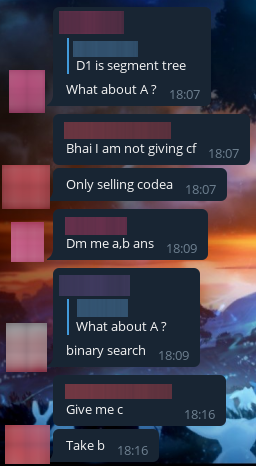 However, there are cheaters who are also scammers! Apparently, he got the solution of another cheater and he didn't sent his solution to this cheater:

And then something extremely interesting happened. I started getting personal messages from... Cheaters themselves! And they started to expose other cheaters! Apparently, they have absolutely no cohesive team.

One man (I am very grateful to him), gave me links to a couple of youtube channels, where there were cheaters. On one of them I went in the middle of the contest and also wrote in the comments, but I'll talk about that later. By the way, on one of the channels we can see the nickname of the author. A little later, when it comes to youtube channels, I'll show you who it was, and hopefully he will get banned.

So, here's what was written to me about youtube channels:

Somebody couldn't even believe that I actually authored the contest:

Unfortunately, I don't have the most interesting messages saved because I blocked this cheater for direct insults, but to summarize, there were messages like this:

And then I banned him in Telegram.

The third and final group was a relatively small group of cheaters [no link yet]. By the way, this group was suggested to me in the personal messages by one of the cheaters from the previous two groups. I repeated the procedure here. There was an unexpected meeting with a fake of a known user and also I wasn't believed that I am Wind_Eagle: 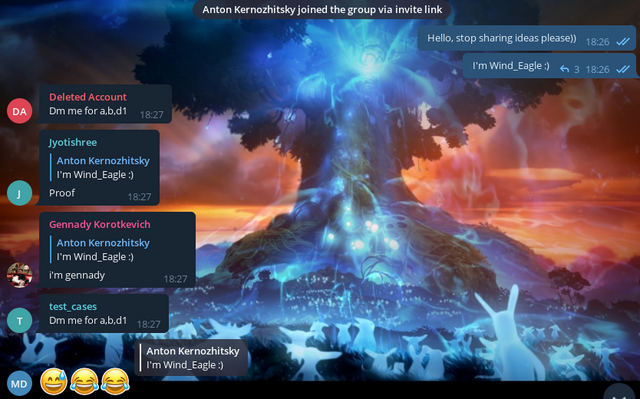 In fact, I found it interesting to watch people refuse to believe that I am really the author of the contest. They threw funny smiley faces and jokes, but they couldn't admit it. Even when I made a screenshot showing that I was in my account and could edit the announcement, they still wouldn't believe me, saying that I had edited the HTML page. So, dear cheaters! I'm real! :)

Now let's talk about youtube channels. I found two of them: [link not yet] and [link not yet]. Unfortunately, the second channel has already finished broadcasting, so I left him a funny comment:

By the way, here's a screenshot of his screen: 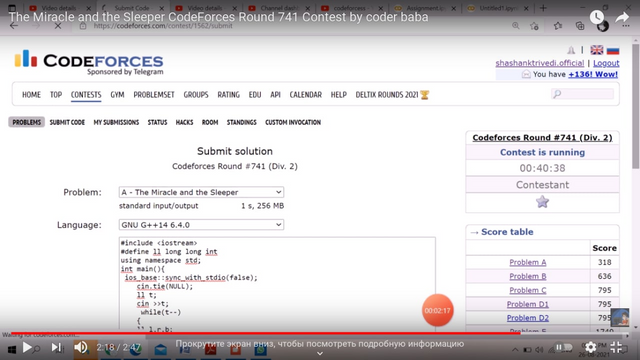 I hope he will get banned.

I don't have any screenshots from the first channel, unfortunately. All I can say is that I wrote a message there, "Hi, I'm Wind_Eagle. Stop the stream or you'll be banned." By the way, in the comments, unlike in telegram, the tasks were discussed much more openly, codes and ideas were exchanged there in public.

Now a little bit about the good stuff. I received quite a few messages from users of these cheat telegram groups, in which they... say thanks for the contest! I've chosen a few of the best ones: 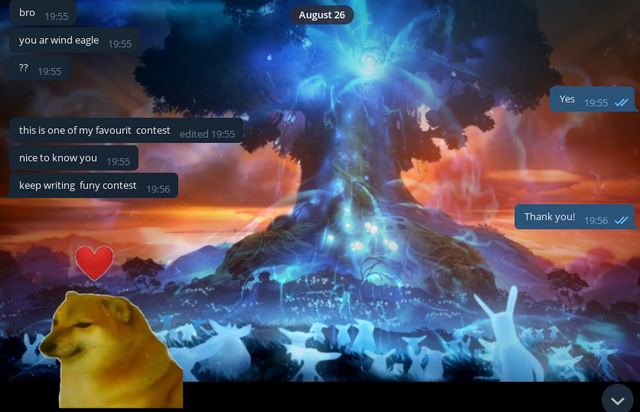 What does one want to say as a conclusion? It's all very sad, frankly. There are not just a lot of cheaters. Not just very many. There are too many of them. I'm afraid that there is only one way to fight cheating on CF: to close such telegram/youtube channels. Otherwise there is simply no way to deal with this problem.

In conclusion I want to answer a few questions upfront:

Q: Why wouldn't you stop cheaters from doing their dirty work!

A: And how could I prevent them? Drop the wrong code? One cheater would have checked it and written about it. Incorrect codes often appear in such groups.

Q: Do you have time during the contest to do this nonsense?

A: Well, usually the writers answer the questions. But when there weren't many questions, I did messaging. I apologize if I made anyone wait a long time for an answer to a question.

P.S. Do you think I should leave links to cheater groups/channels? I'll read the comments, and if this idea will be supported, I'll post the links.