Airports often use moving walkways to help you walking big distances faster. Each such walkway has some speed that effectively increases your speed. You can stand on such a walkway and let it move you, or you could also walk and then your effective speed is your walking speed plus walkway's speed.

Every walkway is located inside the segment $$$[0, L]$$$ and no two walkways have positive intersection. However, they can touch by endpoints.

Limak needs to decide how to distribute his energy. For example, it might make more sense to stand somewhere (or to walk slowly) to then have a lot of energy to walk faster.

Limak can choose his speed arbitrarily (any real value in interval $$$[0, 2]$$$) at every moment of time (including the moments when he is located on non-integer positions). Everything is continuous (non-discrete).

Print one real value, the fastest possible time to reach $$$L$$$. Your answer will be considered correct if its absolute or relative error won't exceed $$$10^{-9}$$$. 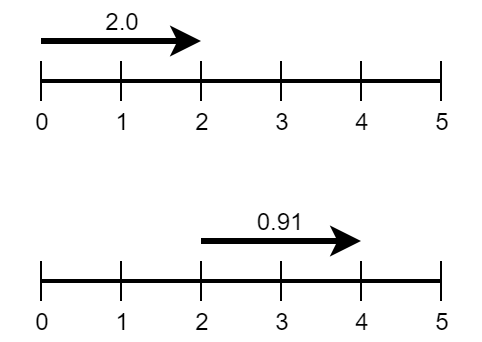 In the first example, one of optimal strategies is as follows.