In this post I'll try to expose the results of my research regarding the rating formula. More specifically, I'll show a graph that gives you a match rating according to your performance in a contest and some aspects of how ratings are updated. This post is quite large, if you are only interested in the results you can easily skim through it :) Disclaimer: I'll try to support my assumptions and assertions with data but, altough I have done the analysis carefully, I may have done a mistake :) Moreover, take into account that some of my formulas are approximations.

Almost two years ago I started to participate in contests more actively, aiming to be red one day. To increase my motivation I tried to find a formula that evaluated how well I did during a competition. At that time there were no API nor DmitriyH's statistics so I manually looked at a lot of profiles to try to find 'stable' points: users that didn't change their rating after a competition. Supposing that meant they had performed as they were expected I obtained two approximate linear formulas for Div-1 contests:

The 1st formula was a good approximation, but started to fail roughly for red performances and the second one worked pretty bad; but they gave a good idea of how the match had gone. With this I did an Excel like this one:

As you can see, while my rating (right coloured column) stayed pretty boring being always yellow, my performance (left coloured column) was much more variable going from 1400 to 2500; these variations added a lot of motivation. Moreover, this gave a clear feedback in Virtual Rounds, making them more useful and motivating.

As months progressed I saw that this formula was helping me and could help others as well, so, as an extra motivation, I promised myself that when I first turned red I would do a serious post about it. I may not be red when you read this post; but,anyway, here it goes!

The basis of my work is MikeMirzayanov's blog, along with some others. In CF, the probability that A wins B in terms of their rating is:

This formula also shows that (obviously) your expected rank does not only depend on your rating, but also on your competitors. However, as I'll later show, for most participants this will not matter. Another thing that can be observed is that the relative position of your competitors will not affect your rating: in other words, it doesn't matter if you beat a red and a blue beats you or you beat a blue and the red beats you. Finally notice that expected percentile is a very similar formula, we will use it later.

The theory of the ELO system suggests that, after a match, ratings of A and B should be updated by a constant multiplied by the difference between the expected result and the actual result. For instance, if the constant is 14 and the guy with the probability of winning of 0.7 looses, his rating will decrease by 14*(0-0.7) = -9.8. We can't do this in CF because competing against 600 coders in a single contest isn't the same as competing in 600 individual contests with each one of them: results are much more variable in the former case. Thus, we'll have to think of another update rule that takes this into account; more on this at the end of the blog.

Volatility and other assumptions

Topcoder uses similar ideas, but also assigns a volatility to each user. Looking at worse's or dreamoon's profiles made me think there was no such thing in CF (because their ratings movements have no acceleration). Topcoder also takes into account the number of contests done, I believe CFs doesn't do it either. I'll try to show more evidence of this below.

In my analysis I'll also assume that the rating formulas didn't change (which probably did, but not much).

To obtain the exact formulas I needed to obtain much more data; thus, I turned to Codeforces API (thanks a lot Codeforces admins for creating it!) I had no idea about APIs and almost no idea about python, but I found soon's blog, which was incredibly useful; you should check it out!

With this I wrote a code to obtain the Rank, OldRating, NewRating (and other data) for every user competing in a contest and then analyzed the results on Matlab.

One of my objectives was to find the formula to update ratings. I used slightly old (contests 350 to 450, we're at 550 now) data to obtain the models and reserved the recent data for testing if the models were correct. Some things may have changed slightly, but not much.

Rating distribution of users in a contest

Here are the rating distributions for the 3 types of contests. Rating 0 is for new participants. I have averaged several contest, but they don't change much from contest to contests. Finally note that they are not equivalent to rating distributions of all users in CodeForces since some users with some ratings participate more often than others. 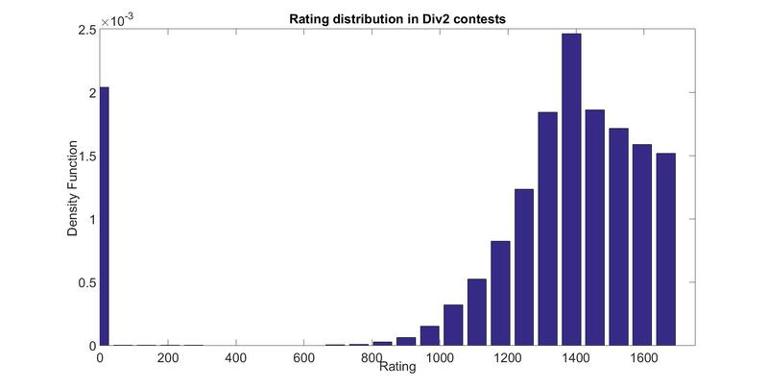 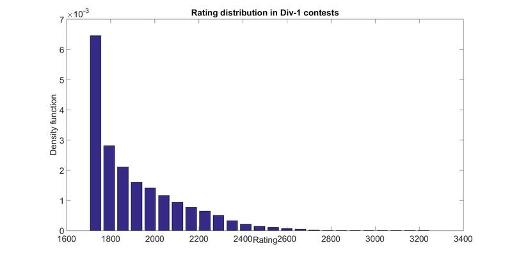 Accidentally I also found what I believe to be evidence of rating inflation. Notice that it's slightly old data, it's probably better now :) This is the mean rating of participants in Div1-contests: 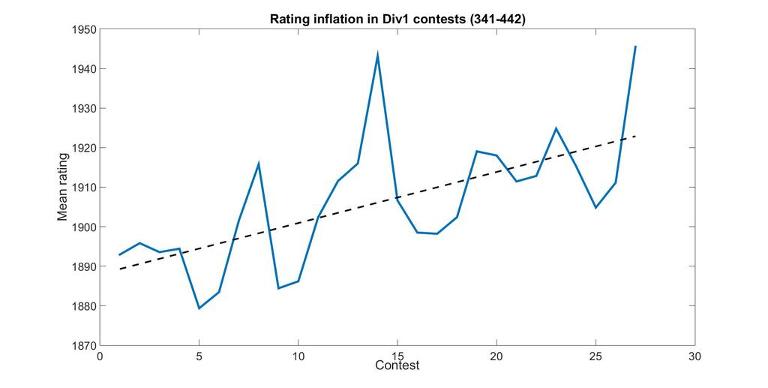 Evaluating the performance in a contest

The following graphs are very exact for the linear section in the middle (where the Law of big numbers applies and every contest is roughly the same); there, the line width of the graph is bigger than the variations between contests. Variations are larger on the extremes: for instance, the equivalent rating of the first places is greatly affected by tourist's or Petr's presence. 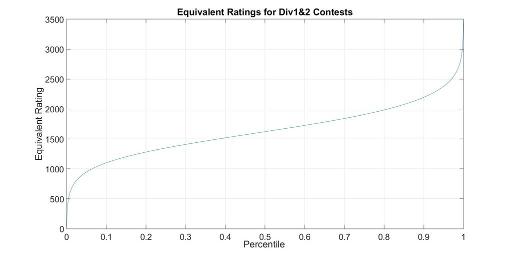 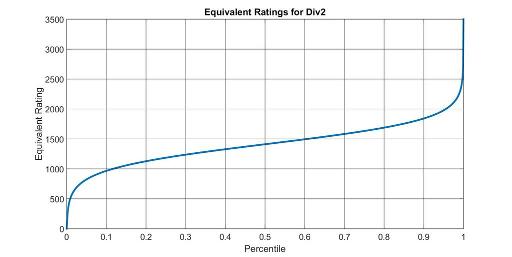 If you want to check particular percentiles with more detail, you can take a look at this Google Docs excel.

The formula for rating updates turned out to be a nightmare to reverse-engineer and, in fact, I failed to do so. Luckily, my wonderful girlfriend mariabauza helped me find patterns and observations that we believe are insightful and useful!

We can make a 3-D scatter plot of Rating Increase vs Old Rating and Perfomance (= MatchRating-OldRating); where MatchRating is what we calculated in the previous section. This turns out to be a surface (it could have been a cloud/volume); therefore, we can be sure that we only need those 2 parameters to make the update! (This confirms the fact that volatility nor number of contests are taken into account). The updates for all contests have roughly the same form; though the parameters of these forms vary slightly from contest to contest(probably due to the number of participants and number of new participants). As an example, here's the surface for Looksery cup: 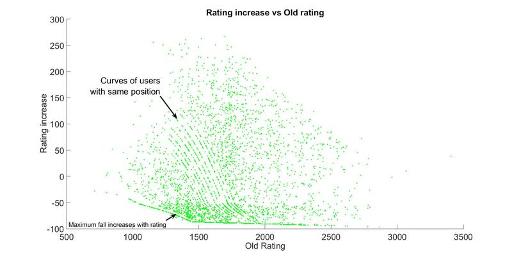 In this graph we observe that rating increase correlates negatively with OldRating; which actually makes sense; it makes the whole system stable. We don't know if this is somehow directly helped from the design of the rating formulas or a consequence of regression towards the mean. 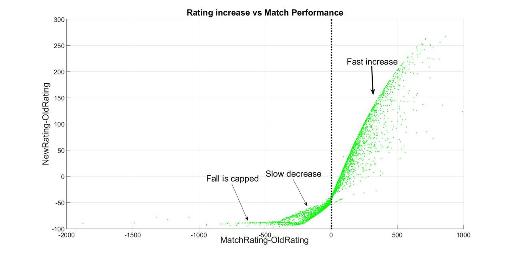 Notice that if you perform as you are expected, your rating actually decreases; which we already knew it was done to prevent rating inflation. Moreover, this point separates two regions: above it your rating change rapidly increases while below it the fall is slower. When performance is roughly 0 changes are quite linear (as ELO theory suggested), but after some point they start to curve and converge. We've tried to fit them both with powerlaws and rational functions; both fittings work pretty well (however, when we try to fit everything with a function depending on both coordinates it doesn't work so well). Finally, if you perform really bad there's a maximum fall, which is usually around -100 (and it depends on your rating, as we saw in the previous graph).

I hope you enjoyed the analysis!