We're thrilled to invite you to the two great events which will be held in Turkey for the first time ever!

ICPC is delighted to announce the First National Programming Contest in Turkey, organized by inzva in collaboration with the Middle East Technical University (METU) to be held on September 13-15, 2019.

We’re inviting university teams across Turkey to participate in the national contest in Beykoz Kundura, Istanbul — completely free of charge — thanks to the ICPC local partner — inzva, a non-profit community focused on artificial intelligence and algorithm, supported by BEV — an Education Foundation for the Digital Native Generation. 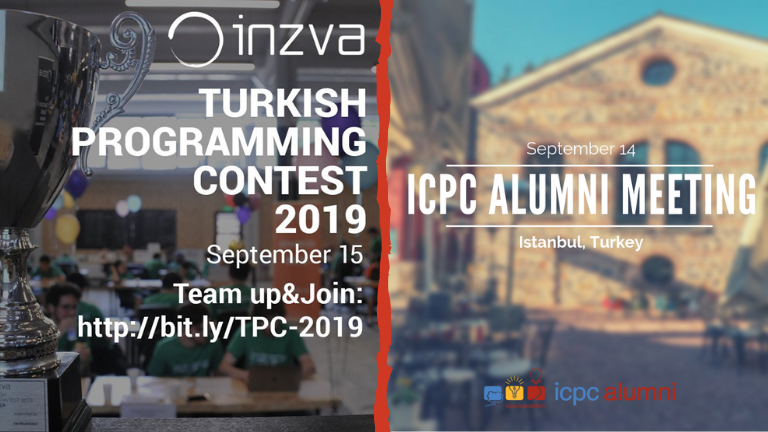 Also, this weekend on September 14 in Istanbul will be held the Annual ICPC Alumni Reunion Dinner.

It is the first ICPC Alumni event happening in Southeastern European Region, and we will be extremely honored to welcome you and your colleagues/classmates/coaches on this special day. Please feel free to extend this invitation to your guests.

ICPC Alumni Reunion Dinner will be held on Saturday, September 14, 2019, at Beykoz Shoe Factory, Yaliköy Mah. Süreyya İlmen Cad. No:1/1 Beykoz, Istanbul. There will be a reception that begins at 4pm, with dinner to follow at 5pm. Please feel free to extend this invitation to your guests.

This event is free of charge but requires reservation before September 1, 2019. Please be sure to RSVP via this form to secure your place:

In addition to this being a fun reunion for local ICPC participants, we will be recognizing the accomplishments of various ICPC volunteers who make the show happen each year. ICPC Executive Director Bill Poucher will be in attendance, and various other judges, staff, and coaches. We would be honored if you can make it as well, and partake in the festivities.

We are unfortunately unable to welcome all outside guests but have done our best to invite as many ICPC Alumni as possible, please feel free to extend this invitation to any other finalists/regional participants that you know to be in the area. You can also send their names and contact info to manager@icpc.global so that we can add them to the invitation list. Once registered — you’ll receive official confirmation of your personal invitation, as well as all travel details.

Looking forward to meeting you in Turkey!

By ICPCNews1, 11 months ago, translation, 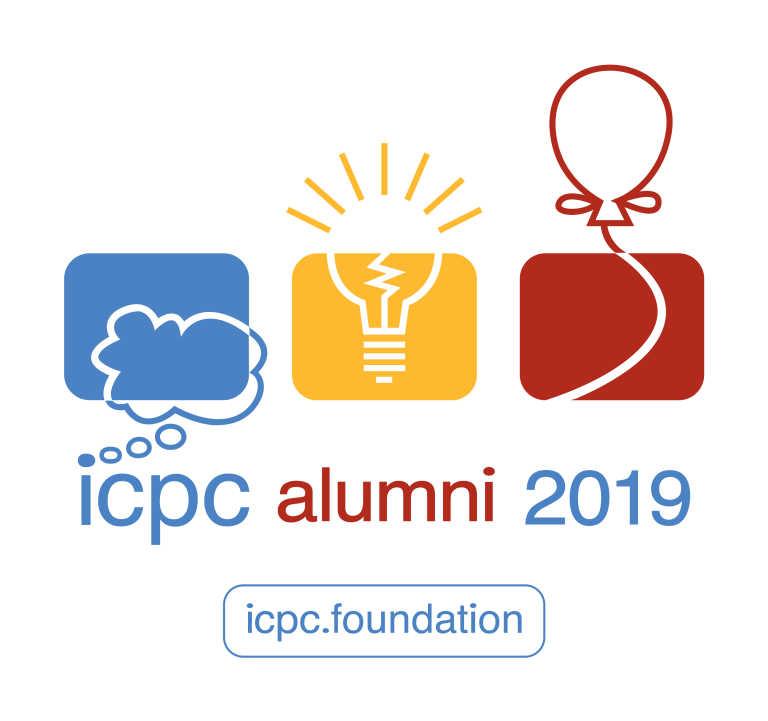 We glad to announce the first ICPC Alumni event happening in Russia!

ICPC Foundation is currently working on building the ICPC Alumni association across the globe and we're happy to announce our big reunion event to be held at a very special location — ITMO University, St.Petersburg, Russia.

We will be extremely honored to welcome you and your colleagues/classmates on this special day. In addition to this being a fun reunion for local ICPC participants, we will be recognizing the accomplishments of various ICPC volunteers who make the show happen each year!

ICPC Alumni Reunion Dinner will be held on Saturday, July 6th, 2019 at ITMO University (St.Petersburg, Russia) on Birzhevaya line 14-16. There will be a reception that begins at 5pm, with dinner to follow at 6pm. And those who want — may join us for a boat trip following the dinner.

Please be sure to RSVP via this form to secure your place before June 23, 2019:

ICPC Executive Director Bill Poucher will be in attendance, and various other judges, staff, and coaches. We would be honored if you can make it as well, and partake in the festivities.

We are unfortunately unable to welcome all outside guests but have done our best to invite as many ICPC alumni as possible from Russia and Europe. Please feel free to forward this invitation to any other finalists/regional participants that you know to be in the area. You can also send their contact information to manager@icpc.global so that we can add them to the invitation list if you'd prefer.

If you have any photos of your time as an ICPC contestant, coach or volunteer that you would like to be shown at the event added to the ICPC History Archives and/or shared over ICPCNews, please share it with us!

We’re looking forward to enjoying a fun reunion and celebration of all things ICPC!

By ICPCNews1, history, 2 years ago,

My name is Fadi Ashy I’m a Game Programmer and a senior software engineering student at Al-Baath University from Syria. ACM was a big part of my life through college. I was a contestant for three years reaching my country’s final “SCPC” three times and for the fourth year, I went to be an organizer for our local and country’s Contest. Codeforces was a huge player in my journey solving around 300+ problems in different areas of the sea of Computer Programming.

My story to the ICPC started when I logged in my e-mail one day and came across a contest hosted by the ICPC in my newsletter for a chance to win a trip to the ICPC Finals in Beijing by sharing a small video about yourself in the ICPC. So I got my camera and posted my video on YouTube and waited for the results and finally, I got accepted and even more on that I got the chance to work with the ICPC News team on the contest hall.

My preparations for the ICPC went fine getting all the paperwork. Sometimes it is problems to attend because of where you live. I faced some basic problems that everyone had while living in Syria. I got a problem paying for the visa and my ticket because there was no online payment and then I got my visa because it was delayed about 4 days before the travel time, but with some really awesome people from the ACPC and SCPC helped me a lot.

After all the preparations have been done we started a 24 hours trip from my hometown in Syria all the way to Beijing crossing more than 3 countries using buses and planes. It was one of the longest trips I’ve ever had, but the end of it was one of the greatest cities on earth.

When we arrived, I was stunned by how many people are there in the ICPC. I’m used to participating and organizing small events and not something this big. But I realized something: more people sometimes means more fun. I can’t explain how amazing it was to share your story and get to meet a lot of people from so many countries around the world, and also being in the geekiest community ever. All the talks and the conversation we shared was about computer programing and some cool stuff happening in that field. I also got the chance to meet the greatest managing team ever and had a chance to meet people that were known to me in just a small name at the end of an e-mail.

But finally, I got to meet the ICPC News team. I got my bag and fired up my laptop and waited for some task to help in with. Working on some photos using Photoshop and working on small Ideas and even helping in the live stream on the official page. What I loved the most about the team is how professional they are. And yeah, I used a mac for the first time and it isn’t that good… mmm maybe I’m windows fanboy, I don’t know.

And as I mentioned before, a big number of people also need an awesome huge place to host them all and Peking University is spectacular, amazing Campus, amazing students and I can’t really describe the contest hall. I think the photos should describe it all.

Maybe I have more fun working than really having fun, but the ICPC is full of fun activities either with the teams and friends, or you can ditch all ICPC stuff and go walking in beautiful Beijing. We even got a chance for an awesome trip to visit and climb the Great Wall of China. One piece of advice if you’ll ever go there and you’re a full-time programmer and you’re not used to doing a lot of sports. Are you thinking DON’T climb it just stay on the bus and take a nap. Is it worth it? Kind of: the view from up there is a crazy and an awesome view and you can buy a medal with your name carved on it to always remember that hard time that left you unable to walk for about half a day afterward.

By ICPCNews1, history, 2 years ago,

More than 300,000 students competed worldwide in local and regional events with one aim — to participate in World Finals, this year hosted by Peking University in China. And today we will see who will become the world champion!

A total of 140 teams of three students will face about 12 difficult problems (we don't know the number until the problem set is released!). They will have 5 hours to solve the problems.

Although the contest itself takes 5 hours only, the whole event takes 5 days. So, what is going on during these days?

Through the registration evening, each team was given different color shirt and their badges, as well as other goodies like a backpack and a cute stuffed panda bear. We took photos and videos of each team so we can share about them on various social media.

Monday began with JetBrains TechTrek Presentation and a really fun sponsor showcase with games and activities. Contestants could participate in many things — they could try writing Chinese characters, playing traditional Chinese games or instruments, try sports in VR and more... The day was ended with a stunning concert of both traditional and contemporary Chinese music from Peking University, including some original compositions.

On Tuesday we were amazed by The Giant Wall of China. That day we become true men because the Chinese saying is that one is not fully human until he climbs the Great Wall. It was surprisingly steep. Hundreds of people from 6 continents climbed it and had amazing views of the mountains.

The afternoon was all about the opening ceremony, which had speeches, awards for many wonderful people and a presentation of all the teams, interlaced with cultural performances.

Wednesday was an important dress rehearsal. The program is similar to the competition day. It lets everyone find issues so the finals on Thursday can run as smoothly as possible. There are always some technical issues, problems with logging in, printers, etc., but they all got worked out. In the afternoon, contestants had a rest, enjoy a sponsors' ChillZone with games and do the last preparations for the tomorrow's contest.

140 teams participate in world finals. But there are many other people standing behind scenes — coaches, organizers, judges, ICPC teams (News, Services,...) and many other volunteers, totalling in about 1000 people!

The ACM ICPC world finals aren't only about competing. It is also about meeting with great programmers from all around the world, encountering other cultures and sharing the joy of programming. For me, this event is truly awesome and fun to be part of! 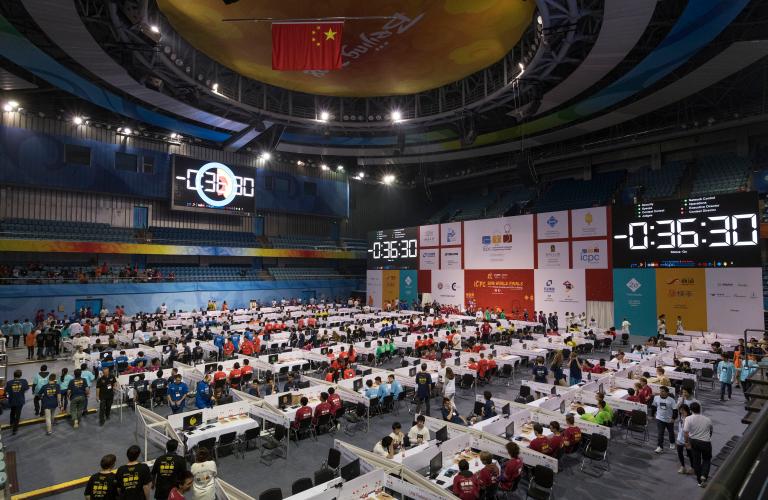