By MikeMirzayanov, 10 years ago, translation, 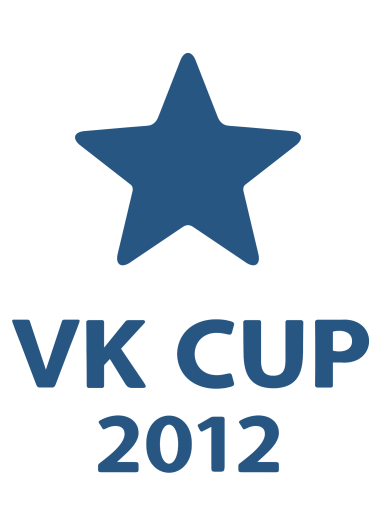 Today is the main VK Cup event: VK Cup 2012 Finals! Good luck to all participants. And to those who don't participate — enjoy the interesting competition. VK CEO Pavel Durov announced the upgrade of a prize fund in the greeting speech at the finals' opening! I'm starting to really regret that I am not a participant.

The participants compete for:

UPD: The contest is over! I believe Alex_KPR will write about the contest and the closing ceremony soon. Thank you for participation and your interest. Here are the complete standings.

Congrats to the winners. The top-3 is:

UPD: As you have already noticed, the 16th July at 19:00 will start an unofficial online-version of the VK Cup 2012 Finals. Anyone can participate and feel himself as a finalist. Round will be unrated. If you already took part in the Finals or familiar with the problems, please refrain from participation. All problems will appear in the archive and will be available to everyone.