This editorial is written jointly by the contest's coordinators (i.e., MemSQL engineers).

There’s a well known O(n2) solution that allows one to find a longest subsequence of a string which is a palindrome: for every pair of positions l and r, such that l ≤ r, find the length d of the longest palindrome subsequence between those positions.

There are two ways to solve this problem faster than O(n2) with the constraints given in the problem:

where next(pos, s) is the next occurrence of character s after position pos. Next can be precomputed for all the positions and all the characters in advance. See DamianS's 4221965.

The most straightforward way to solve this problem is to use Grundy numbers. Define a segment as a maximal range of rows in which no cells have been reclaimed. Since segments have no bearing on other segments, they can be assigned Grundy numbers. There are 4 types of segments:

Each time a cell is reclaimed, it splits a segment into 2 segments (one of which may have size 0). We can compute the Grundy value for all possible segments in O(r2). Then after sorting the reclaimed cells by row number, we can find all segments and compute the Grundy number for the full state.

Alternatively, we can compute the result directly. Suppose the game is over. We can determine who won the game just by looking at the top row and the bottom row. Let us define “parity” as the modulo 2 remainder of (r + n + c0 + c1), where c0 is the column of the reclaimed cell with the lowest row, and c1 is the column of the reclaimed cell with the highest row. Claim: when the game is over, the parity is even. This can be seen by observing that the number of empty rows is equal to the number of times the column changes. In other words, if c0==c1, there are an even number of empty rows, otherwise an odd number of empty rows. Now, given r, c0, and c1, we can determine n, and therefore the winner.

Case 1: if r0==r1 and the parity is even, the state is losing. All available moves will either decrease r0, decrease r1, or make the parity odd. The other player can respond to the first two types of moves with a mirroring strategy, and the third by making the parity even again (there will always be such a move that doesn’t affect r0 or r1, based on the fact that the argument above).

Case 4: if abs(r0-r1)==1 and the parity is even, there is at most one move that doesn’t leave our opponent in Case 2 or Case 3. Suppose r0==r1+1. We must change either r0 or r1, since all other moves will change the parity to odd. Thus our only option is to decrease r0, since decreasing r1 would leave our opponent in Case 2. We could decrease r0 by 1, but doing so would change the parity. Thus we must decrease r0 by 2, and there is at most one move that does so and keeps the parity even. It follows that if floor(r0/2)+floor(r1/2) is even, then this is a losing position, otherwise a winning position.

Even though constraints were allowing O(k^2) solutions, in this editorial we will describe an O(n log(n)) solution. This problem has a rather long solution, involving several very different ideas: On the first step, for every rectangle we want to determine, if we were to consider this rectangle as the top left corner of a square, how long could the top and left edge of the square be (see the picture). 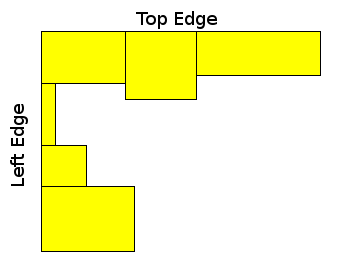 When top and left edge lengths are computed, we want to compute the max bottom and right edge length if this rectangle was the bottom right corner of the square.

On the second step, we want to find all possible square frames. Look at this picture to better understand what we mean by square frame: 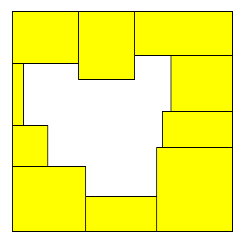 To find a frame, let’s sort all the points first by x - y, and then by x (or y -- both will yield the same result). This way all the points are sorted by the diagonal they belong to, and then by the position on that diagonal. Then we will maintain a stack of pairs (position, edge length), where edge length is min(top edge length, left edge length). Position could be either x or y (within a given diagonal relative differences in xs and ys are the same). Min edge length tells us what is the largest square that could start at that position.

When we process a new point on a diagonal, first pop from the stack all the pairs such that their position + edge length is less than our position. If stack after that is empty, then the current point cannot be a bottom right corner of any square. If stack is not empty, then there could be some frames with the current point being bottom right corner.

A possible O(k2) solution is similar, but makes checking whether or not the frame is filled much and a bunch of other checks easier. See my 4234474.

The skyscrapers in this problem depict a data structure called Skip List. Skip list is similar to AVL and red black trees in a sense that it allows O(log N) insertions, deletions and searches (including searching for lower and upper bounds), as well as moving to the next element in sorted order in constant time. Skiplist is different from any tree structures because it has a practical thread safe implementation without locks (so-called lock-free). Lock free skiplists are used as a main data structure to store data in MemSQL, and the algorithm that Bob uses to traverse the skyscrapers is an O(log N) approach, that allows one to estimate the size of the skiplist. Thus, if Bob ended up with an estimation of n, the actual skiplist size is expected to be n (so if the first line of the input file is Bob, one just needs to print the number from the second line to the output). Formal proof is rather simple, and is left to the reader. Curiously, the converse does not hold. If the skiplist size is n, the expected return value of the estimation algorithm could be bigger than n. For an n that is significantly bigger than 2h the estimate converges to n - 1 + 2h, but this problem included cases with smaller n as well.

Now, assuming that such a zip line exists, what’s the expected number of zip lines immediately below it? This is simply one more than the number of towers of height H - 1. Each of the L - 1 towers has probability 1 / (2H - 1) of having height H-1 (given that it has height at most H-1) -- use conditional probability (

The final answer is therefore

Congratulations Petr and tourist for the only persons solving this problem in-contest both on-site and off-site!

This problem is equivalent to maximizing the total value of items that we can get for free.

For each tuple <#val, #num>, we can calculate #max_free, the maximum number of items (not value) that we can get for free up to this point easily.

So, we want to populate #pieguy so that it contains exactly #max_free “things”. #pieguy is special, in that we can compute the maximum price that we can get for free for n items by summing up the n most expensive items in #pieguy. How could #pieguy do that?

We’re now at <#val, #num>, and we have #pieguy from previous iteration. #pieguy contains the previous #max_free elements. Assume that #num <= number of items more expensive than this value, for otherwise the remainder are ‘dead’ and useless for our current purpose. In particular, for the first tuple we process, we assume that #num is 0, since all of them cannot be gotten for free.

Suppose we want to obtain exactly #max_free items. How many of the #num must we use?

Let’s arrange the current members of #pieguy in descending order. For example, if #pieguy has 5 members:

Let’s arrange #num #val under #pieguy so that the rightmost one is located on position #max_free. For example, if #num is 6 and #max_free is 8 and #val is V....

These 6 Vs will be competing for a spot in #pieguy.

1) what happens if C < V? This means, instead of making C free, we can make V free instead! (if you’re wondering why this is possible, remember that #pieguy definition I gave you was not entirely honest yet). So, we replace C, D and E with all Vs, and we get our new #pieguy! A B V V V V V V (this should be sorted again, but C++’s multiset does that automagically).

Now the fun begins! If you want to contend for the 4-th place, any solution MUST HAVE AT LEAST 2 V s (remember that the 4-th place is used in a solution consisting of at least 4 free items). In general, if you want to contend for the #max_free — i -th place, you MUST HAVE AT LEAST #num — i Vs. #proof? is easy, exercise (i’m honest!)

Okay, so back to contending for the 4-th place. If D is still > V, we proceed. Otherwise, we know that D < V. This means, E and any element after E is also < V! Thus, we can replace all elements after or equal to E with V! The problem would be the final element of #pieguy.

When the final element of #pieguy is included in the sum, it is only included in the sum of all n elements of #pieguy. You do this when you want to calculate the maximum sum of values of free items you can get when getting exactly #max_free items. Any such solution must include all #num elements with value #val. We have included #num-2 Vs in #pieguy. Thus, the final element of #pieguy must somehow contains 2 Vs! So, elements of #pieguy actually can do this. Instead of containing a single elmeent, each element of #pieguy is more of an “operation” that adds several value and removes several value. In our case, we want to add 2 Vs and remove something. The something? The smallest element that we can remove (the ones that we haven't removed)! C! (if you're wondering why not D or E, it's because (again) #pieguy is special -- it only forms a solution if the most expensive t are summed, not if some are skipped. -- we cannot skip C if we want to use D).

So, Insert 2V — C into #pieguy, and the rest, insert V into #pieguy. 2V — C is < V, so summing all elements of #pieguy correctly found out the max value when we receive #max_free free items!

Right! Cool! ...except that 2V — C can be negative. Why would we want to insert negative stuffs into #pieguy? We don’t! Actually, we check if 2V — C is negative. If it is, we continue instead, and check 3V — C — D and so on, under the same reason.

That’s it folks! I skipped some details of why this works (for example, that the number of V selected is always sufficient to guarantee solution in #pieguy), but they're easier to see once you get this large idea. The result is then #pieguy.last_element

Tutorial of MemSQL start[c]up Round 2