Hi everyone! Today nor sir and I would like to talk about generating uniform bracket sequences. Over the past few years when preparing test cases, I have had to generate a uniform bracket sequence a few times. Unfortunately I could not figure out how, so I would like to write a blog about this now. Hopefully this blog would be useful to future problem setters :) Scroll down to the end of the blog to copy our generators.

An alternate way to think about the prefix sum is to imagine the bracket sequence as a sequence of increasing and decreasing lines.

We can see that the necessary and sufficient for a bracket sequence to be balanced is that all elements of the prefix sum is non-negative.

Now, we want to note that all irreducible bracket sequences are either balanced or are some sort of "inverse" of a balanced bracket sequences. By inverse, we can either reverse the entire string or flip every bracket in the string. Please note that these are different.

The proof of this is not too hard and you should prove it yourself, but for completeness, I will put it here.

In fact, our claim is a modified version of cycle lemma where we have $$$m=n+1$$$ and $$$k=1$$$ (see, for instance, $$$[3]$$$ for two nice proofs -- one by arranging the sequence on a circle and removing certain segments, and the other using an idea similar to the prefix sum idea presented above).

This translation is extremely abridged because I do not want to translate some stupid story line about the main characters from Chū-2 playing Yu-Gi-Oh.

Let's pretend that the cards don't exist for a while and we are just dealing with strings of length $$$2(n-m)+1$$$. We know that out of the $$$2(n-m)+1$$$ rotations, exactly one is valid, so our only concern is that this valid rotation is not present when we add on constraint about rotation with the "barriers" of the cards. But this will never happen because the string will be of this form $$$\texttt{(}X\texttt{))}$$$.

It is not too hard to show that each of the $$$3$$$ brackets belong to different cards due to the types of string that can be written on each cards. That is, we first have a valid rotation out of the possible $$$m+1$$$ rotations when accounting for the "barriers" of the cards, and the last character corresponds to a single card, so we can simply remove it.

Thank you nor sir for writing this part and independently discovering it.

The mapping mentioned here was, unfortunately, already present in literature $$$[5]$$$ after we checked, and my old proof was quite similar to the one mentioned in the paper. It used the Chung-Feller theorem, which says that the badness of bracket sequences is uniformly distributed (i.e., there are an equal number of strings for each value of badness), and then showed that the mapping was in fact a bijection from the set of strings of a fixed badness to the set of balanced bracket sequences.

However, I came up with a much simpler proof which we will present below along with the intuition behind the construction (we could not find this proof anywhere, so if anyone finds a reference, please let us know in the comments).

In fact, if, in the proof, we also keep track of the badness of the strings that generate a given balanced bracket sequence, we can see that there is one input string for each possible value of badness (and this gives an alternative proof of the Chung-Feller theorem).

Also, there is a (rather inelegant) method of generating balanced bracket sequences without using any of the techniques discussed earlier.

One of the first ideas that anyone attempting this task might have is to randomly place $$$\texttt{(}$$$ or $$$\texttt{)}$$$ in a string unless it is impossible to do so. However, we do not get a uniform distribution. Instead, let us vary the probability that we place $$$($$$ or $$$)$$$ in accordance to the actual probability that we will see in our required distribution.

Now, with a similar case work to our original solution, we can show that this set similarly rotates with our string (exercise to reader). The claim is now that if and only if $$$2n-k \in s_p$$$, then the concatenation of $$$\underbrace{\texttt{((}\ldots\texttt{(}}_{k \ \text{times}}$$$ with the first $$$2n-k$$$ characters of the string gives us a balanced bracket sequence.

Thanks to pajenegod for pointing out that this method might be faster than $$$O(n^2)$$$.

We see that the distribution is symmetric (which isn't that important) and that larger values appear on the extreme ends (which is important). This suggests in most cases, our recursion will make one side much smaller than the other.

After empirical testing and explicitly calculating the theoretical value of $$$T(n)$$$, I have observed that the actual complexity is $$$O(n \log n)$$$. I think it is quite interesting that despite our recurrence usually cutting at values of around $$$\sqrt n$$$, we end up having a total complexity of $$$O(n \log n)$$$ anyways, but probably with a significantly large logarithm base. 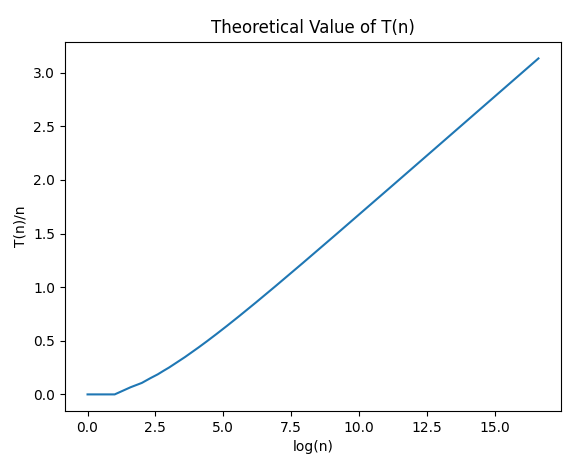 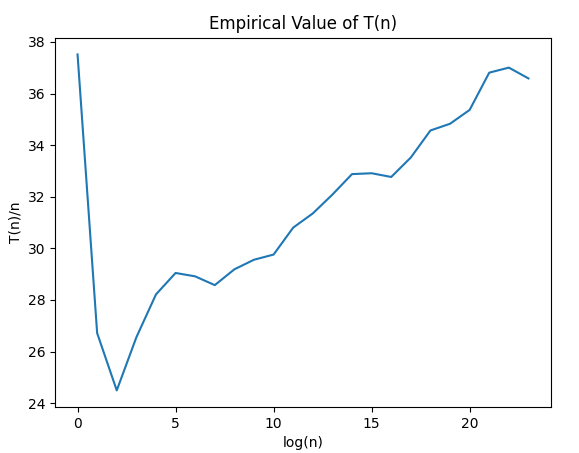