So my O level Chinese exam is in 2 days so I decided to learn a data structure that I can only find resources for in Chinese. I thought I might as well write a tutorial in English.

This data structure is called 析合树, directly translated is cut join tree, but I think permutation tree is a better name. Honestly, after learning about it, it seems like a very niche data structure with very limited uses, but anyways here is the tutorial on it.

The $$$O(n^2)$$$ solution for this is using sparse table and checking every subsequence if it fits the given conditions. But it turns out we can speed this up using permutation tree to $$$O(n\log{n})$$$.

So we want a structure that can store all good ranges efficiently.

Firstly, we can notice something about these good ranges. They are composed by the concatenation of other good ranges.

So the structure of the tree is that a node can have some children and the range of the parent is made up of the concatenation of the children's ranges.

As we can see from the above image, every node represents a certain good range, where the values in the node represent the minimum and maximum values contains in this range.

We shall define some terms used in this data structure:

The property of join nodes is not too hard to show by looking at the definition of what a join node is.

But the property of cut nodes is slightly harder to prove. A way to think about this is that for some cut node such that there is a subsequence of ranges bigger than 1 that form a good range, then that subsequence would have formed a range. This is a contradiction.

Now we will discuss a method to create the Permutation Tree in $$$O(n\log{n})$$$. According to a comment by CommonAnts, the creator of this data structure, a $$$O(n)$$$ algorithm exists, but I could not find any resources on it.

We process the permutation from left to right. We will also keep a stack of cut and join nodes that we have processed previously. Now let us consider adding $$$P_i$$$ to this stack. We firstly make a new node $$$[P_i,P_i]$$$ and call it the node we are currently processing.

Notice that after processing all nodes, we will only have 1 node left on the stack, which is the root node.

Details of the algorithm

For operation 1, if we note that we can only do this if the node on top of the stack is a join node. Because if we can add this as a child to a cut node, then it contradicts the fact that no contiguous subsequence of ranges of children larger than 1 of a cut node can be a good range.

For operation 2, we need a fast way to find if there exists a good range such that we can make a new node from. There are 3 cases:

Checking if there exists a good range

Let's focus on updating the max values since updating the min values are similar. Let's consider when the max value will change. It changes every time $$$P_{i+1} > \max $$$. Let us maintain a stack of the values of $$$\max\limits_{j \leq k \leq i}P_k$$$, where we will store distinct values only. It can be seen that this stack is monotonically decreasing. When we add a new element to this stack, we will pop all elements in the stack which are smaller than it and update their maximum values using a segment tree range add update. This amortizes to $$$O(n)$$$ as each value is pushed into the stack once.

Now that we can maintain all values of $$$Q_j$$$, we can simply check the minimum value of the range we are interested in using segment tree range minimum queries.

If we can make a new cut node, then we greedily try to make new cut node. We can do this by adding another node from our stack until our new cut node is valid.

Since the above may be confusing, here is a illustration of how the construction looks like. 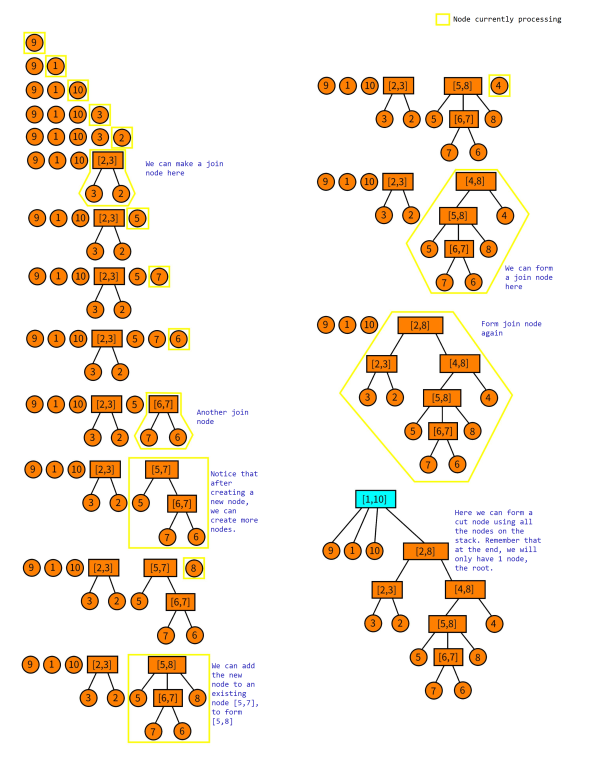 We don't even need to build the permutation tree for this question. We will use the $$$Q$$$ array described earlier. Every time we insert a new value, we just need to count the number of values which are set to 0.

We build the permutation tree and do 2k decomp on the nodes. For each query, we go to a arbitrary node that is contained in the query then using binary lifting, jump to the lowest node that contains the given query. This can also be done by finding the LCA of the left and right endpoints.

Furthermore, when the lowest node that contains the given query is a join node, we still need to binary search again to remove as many left and right endpoints to get the smallest interval.

Codeforces 1205F – Beauty of a Permutation

CodeChef – Army of Me