By hogloid, history, 4 years ago,

Hi I'm going to participate in the camp this year. I just saw the site is now available, but not sure how to register, because U-Tokyo is not on the list of Delegation in the camp registration form. 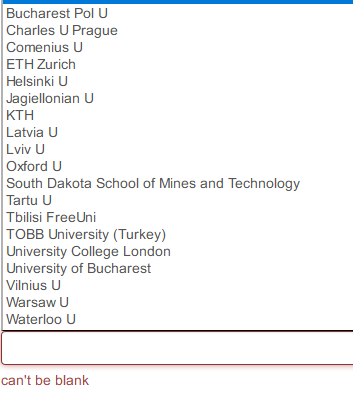 Do you know how to register your university, or can I find some contact to the organizer?

UPD: thanks I've got a response.

By hogloid, history, 5 years ago,

Hi I'm considering to participate in ICPC Bangkok regional this year. However, there seems to be no information other than date here. I'm hesitating to apply before knowing the accommodation and schedule. The registration must be done until 23 Oct '16, so I'm anxious that it'll be updated before the deadline.

Does anyone have information about Bangkok regional this year?

Now it seems the site is updated and the schedule is tentatively determined. Thanks you :)

By hogloid, history, 5 years ago,

For my practice of web applications, I created a simple page to compare CodeForces solved problem between two users, like POJ.org

Though it's still so inefficient and takes long time to show the result, it may be helpful, so I share here.

The usage is quite simple and needs no explanation.

Do not try cracking, please.

evima, yosupo and I would like you to participate in Codeforces Round #286. It will be held on Sunday, January 18th at 16:00 MSK. Please note that this round starts on unusual time.

Great thanks to Zlobober who helped us prepare this round, Delinur who translated statements into Russian and MikeMirzayanov who created Codeforces and polygon.

This is the 3rd time(following #162 and #263) for me, and the 1st time for evima and yosupo to prepare a Codeforces Round.

Scores of the problems will be

In this round, you'll help a man named Mr. kitayuta. I hope he will participate :)

The system tests are now over! The top-5 are as follows:

Also, special congrats on Petr, who solved problem E in Div.1, which anyone else could not solve.

Here are the editorials

Do you know kutengine? He has made some remarkable result here(i.e. 2nd place in Round 257 — http://codeforces.com/contest/449/standings) However, I found some strange things about his logs — in #257, his submission logs are as follows :

When you get WA in contests, sometimes you give up a problem temporarily, and move on to another problem. But if he did not solve A and B simultaneously, he solved problem A in less than 2 minutes! This problem A isn't that simple(it took fastest participant 5 minutes). Also, he made his first submission to problem D, just 1 minute after his submission to C.

Many coders use "template" , on which they write codes. Usually, a person use the same template to avoid confusion. However, the three submissions seem to be based on different template. First code defines pair<int, int> as PII; but the second and third define pair<int, int> as pii; It would be too confusing!

The matters are almost the same in his last round — Bayan 2015 Contest Warm Up.

If he participated individually, I want to know why he made such a strategy.

snuke, EnumerativeCombinatorics and me would like to invite you to Codeforces Round #263 for both divisions. It will be held on Tuesday, August 26th at 18:00 MSK. Note that this round starts on different time from normal rounds.

Great thanks to Gerald for helping us prepare the round, MikeMirzayanov for creating a fine platform, and Delinur for translating the statements.

You'll help men named Appleman and Toastman in this round. Good luck and have fun! 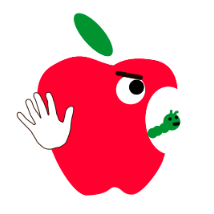 Now the contest is over! Thank you for participating!

Here are the winners:

Congratulations on YuukaKazami, who solved all the problems !

I've made a mistake ; I put "Discard" to cancel the change. But this button is to delete all.

Look for "Looking for a Challenge?"

I found the official site of "Looking for a challenge" (http://www.lookingforachallengethebook.com/) updated and now the site has order form. I really want the book, so I ordered one.But unfortunately, there have been no response.

Does anyone get the book ordered by the form, or receive any response?

UPD: I couldn't get the book; so I asked the IOI team leader of Japan to get some copies directly from Poland Team. Fortunately, because the trouble was transportation, I got a copy.

looking for a challenge

Subsequently to the JOI Ninja Contest last year(http://codeforces.com/blog/entry/5262 ), JOI (Japanese Olympiad in Informatics) will hold a contest mainly for high-school students who enter IOI this year(of course, everyone can participate)

I hope it will help you prepare for IOI :)

UPD: The ranking system is not a perfect one,it is refreshed with delay now. In the actual contest, it will be refreshed once in 5 or 10 minutes,but some trouble may occur,so please don't trust the ranking absolutely.

Today,I participated TopCoder SRM 558. I got 22th place,when my rating was 2088. I thought,I would become RedCoder this time!! However,my rating changed to 2199.I realized I'm unlucky :(

The contest duration is 5 hours,the same hour as IOI,and the number of the problems is 3,this is also same as IOI. I guess other features are like IOI. However, we use stdin/stdout for input/output. Submitting is similar to ordinary Online Contest(not release tokens like IOI,just submit source code)

(actually the problems were made for APIO(Asia-Pacific Informatics Olympiad) 2012,so the problem level is not low)

The problem statements are in Japanese and English.

I hope many contestants will attend this contest,and raise their level together!! (of course,those who aren't contestants of IOI 2012 also can attend it :) )

A trouble of practicing ABBYY Cup

please help!! i tried to submit my solution to the problem E many times(not official,for practice), but my solution couldn’t be received. the screen says “Ooops! Something has broken down in Codeforces. Do not panic, you can try to reload the page or return Home. Anyway we will carefully read megabytes of logs, analyze stacktraces and fix the problem.”. i tried submitting a empty-code to it,and the code was received(of course, wrong answer). and i tried log-out and log-in,but the situation didn’t improve. ??why?? my code is no compile-error, or memory limit exeed. also, i tried the custom test,and the custom test was no problem.

thank you for fixing the problem ^_^ my cause of trouble is using the "%lld". now,the program doesn't be received,too,however,the screen told me a proper warning.