By kshitij_sodani, history, 17 months ago,

Hi ICPC Gwalior-Pune Contestants, We are provisionally releasing the ranklist subject to plag checks. Congratulations to all the winners and hope you enjoyed the contest.

The full scoreboard is available at https://codedrills.io/contests/icpc-gwalior-pune-2020-regional-round/scoreboard

By kshitij_sodani, history, 17 months ago,

T1duS, Ashishgup,xennygrimmato and I will be capturing the live updates of the Gwalior-Pune 2020 Regionals, for teams to later refer to first-solves and the state of ranklist after various times. It is inspired by similar blogs in the past, like this, for example. 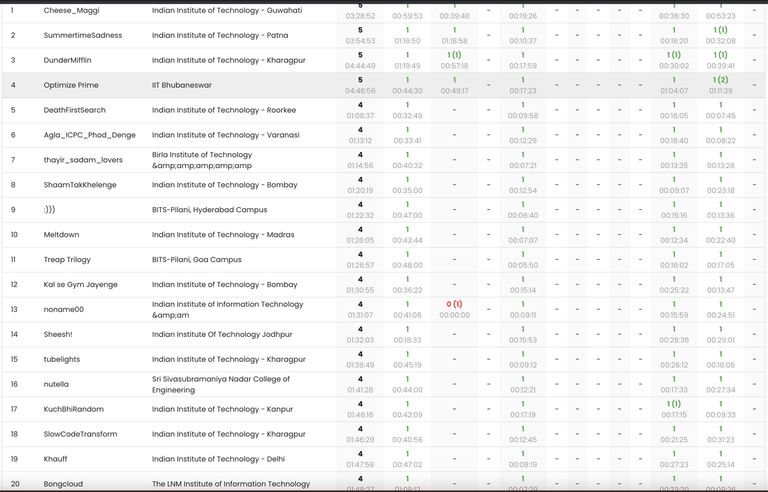 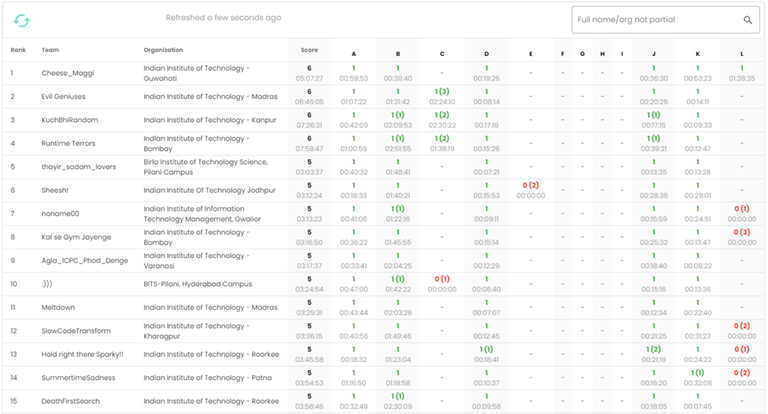 By kshitij_sodani, history, 18 months ago,

Hi ICPC Amritapuri Contestants, It was originally planned to release the ranklist at the ceremony on 21st August, Saturday. However we got some feedback from the contestants that it will be important to know the ranks before other regionals. After discussions between the setting team and the RCD, we have decided to provisionally release the ranklist subject to plag checks. The solution discussion and award ceremony will still be on 21st August. Congratulations to the winners and hope you enjoyed the contest.

Cat and Dice problem Remained unsolved in the contest.Cubical had 1 AC and Lag had 3 AC.Top team solved 8 problems,4 teams got 7 problems and 10 teams got 6 problems.

By kshitij_sodani, history, 18 months ago,

ICPC Amritapuri 2020 Regional Round will be held on Codedrills tomorrow.

Good luck Have Fun! Hope you like the problems!

You can find the live updates here

By kshitij_sodani, history, 2 years ago,

I have made this blog to add links and information of all oi contest(official contest/mirror) happening this year.I missed out the official contests of IZHO and infocup(didn't come to know and no blog post on cf as well).Please post a comment if you know any other OI contest with contest date/registeration date or link

Baltic Olympiad In Informatics 2020 and other OI contests

By kshitij_sodani, history, 3 years ago,

http://www.boi2020.lv/
According to this site the official competition will be held online from 20th-22nd July. I am curious to know if there will be a mirror contest.

Also what is the status of other contests like JOIOC,COI,CEOI,balkan etc? Want to know because these contests are very good to practice for TST and IOI