CP Editor met Competitive Companion in 3.0, giving it the ability to parse contests from over 30+ online competitive programming websites. Now, with CP Editor 5.0, it met CF tools, a wonderful tool by xalanq which can do all most everything in code-forces, even submit solutions. Read more about CF tools in his blog.

If you are a pro-user and like vim keybindings, using cf-tools on your favorite terminal with tmux would give your more than what CP Editor has to offer but at the same time, it is very time consuming and difficult to setup on windows.

Let's dive into what is new for us in CP Editor 5.0

Installation and setup of cf-tool 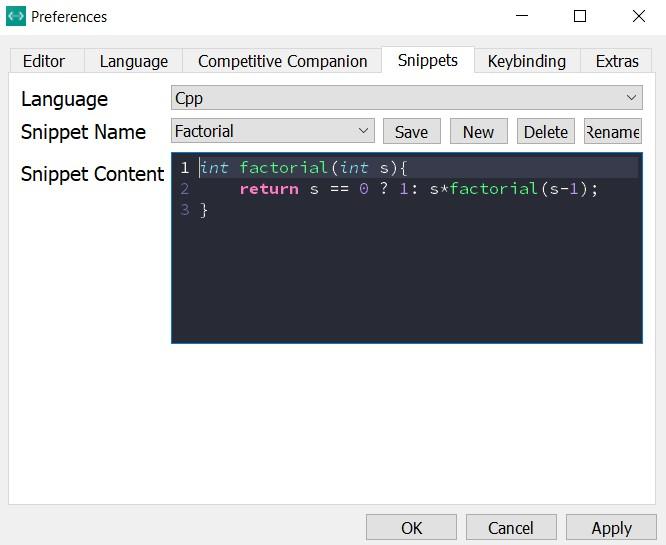 Big Thanks to ouuan for his work in making snippets available.

I will be busy with my new semester and also with Google Summer of Code 2020, Hence pace of development will slow down a bit for this project starting today.

You have can discuss, share your views and get helped or help other there.

Happy new year, may this year brings a lot of AC and high ratings to you. This winter break I decided to improve the CP editor and after days and hours of works and thousands of lines of code changes I am glad to present the new CP Editor. Everything has changed, except the functionality. It is now much faster, more professional looking and offers many new features which were highly requested in old versions.

Let's quickly dive into the changes of CP Editor 4.0: 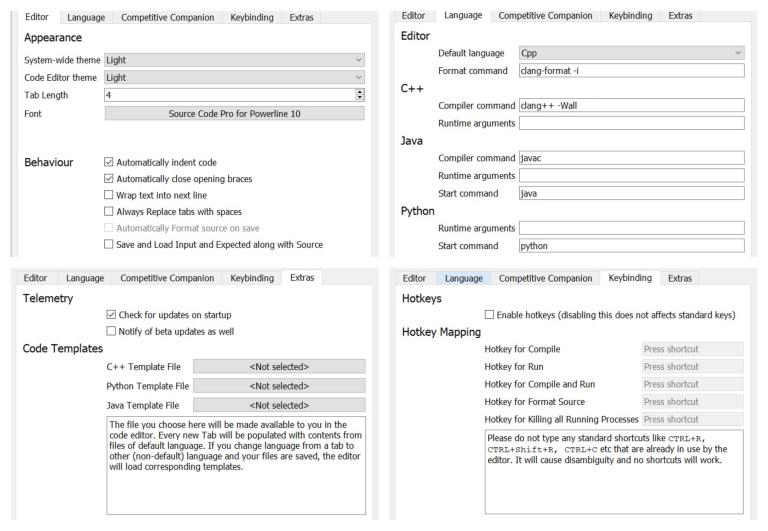 System-wide dark theme that was introduced in CP Editor 2.0 has been deprecated and no-longer available in 4.0. Qt does not support Dark theme officially on Windows, so until it does I am not bringing it back. The Dark theme was a big CSS hack that makes Qt Apps look Dark, so to mitigate any UB that may arise due to use of such Hacks, I removed dark theme.

But for Linux users, if you change theme from System Settings, the Editor should change to dark theme that is controlled by your OS. (Tested on KDE Plasma)

You can head over to the release page and download 4.0.3 (latest). Windows users will download the setup file and Any Linux user can download the AppImage and run the file. MAC users, are requested to compile the editor from source. It is difficult for me to package dmg for MAC since I don't own a mac now. Instructions on compiling is available here

The Source code of this project is licensed under GNU GLP3. Your contributions are welcomed. The repository could be found at https://github.com/coder3101/cp-editor2

I am a student like most of you, not a corporate person. You can support the project by two ways:

You guys are truly amazing. I created CP Editor around 3 months ago just for fun and personal use, never wanted to make it public but anyways, I decided to make it public with this blog. I got so much love and support that I could not hold myself back from improving it, in following weeks I released the second version in this blog. Fixing a lot of issues and bringing new features.

Let's get into what is new in this release of CP Editor. But first,

Thanks to ouuan for his wonderful contributions. Almost all new features were implemented by him.

Now, the test cases (inputs and expected outputs) can be automatically saved and loaded.

To enable this feature, you have to check the "Save Input and Expected" option in the "Settings" tab.

Support me with Stars**

CP Editor 2.0.3 : Everything you wanted is here

Around a week ago, I released the first version of CP Editor. If you are reading about CP Editor for first time. I request you to read my previous blog first.

Many user liked it and I got many suggestions about enhancements and some bug reports as well. I liked your over whelming response, it made me happy. Now it's time for me to make you happy.

Enough talking, let's get into what's new in CP Editor 2.0. It is a big release and hence a long blog ;-)

Last time there was a dark theme but it only made the editor dark. So, it wasn't truly dark theme. Now with this new release CP Editor packs a system-wide dark theme. Have a look here 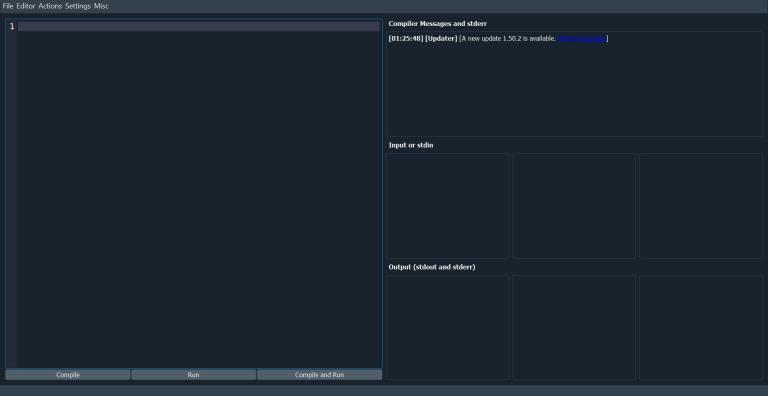 Just like any other software, CP Editor also have a long acyclic dependencies, and over the weeks many were updated. So this Editor has most updated dependencies.

Fonts are important part of any editor. In the last editor it was not possible to change fonts. In this release you can change font, change font size and change font style. If you want some new font, Install the font to your computer and you can then use it inside the editor. Everything is saved and so your fonts won't change unless you explicitly change them. (requested by : sunhero)

I like auto-save feature and use it on all my editors. So in this release you have a option to enable this feature. Auto Save is performed every 5s. So forget CTRL+S after enabling this feature. (requested by : imposter)

Python is also one of the most widely used language here at Codeforces and is generally used by everyone. Now, you can do all that you could do with C++. Write your few-liner python code and Hit CTRL+R and check your output. Say Bye Bye to Python Interpreter CLI. Python is fully syntax highlighted also Python has Auto completion as well. For setup read here

Java is also supported. I didn't disappointed you Java Users. Due to design of Java, you have some restrictions like you have to name your class as a and make it non-public. Syntax Highlighter of C++ is used for this Language so some keywords like instanceof might not get highlighted correctly. In most cases, you won't even notice it. For setup read here

If you run On Input1 and Input2, the Output1 and Output2 box would get value. If then you cleared Input2 and ran again the old values of Output2 would persist. This issue has been fixed in this release. (reported by : errorgorn)

By default editor will now kill all process that would take more than 5 sec to complete. This feature comes in handy when your code is in infinite loop or anything that made your program hung up. The message box will report such kills. This however does not works on Windows due to dependency issue, But don't despair windows user. See next

CTRL+K will kill all running testcases. So if your program hang up. Now you have a nice and tidy way to kill it. The program is sent SIGKILL and hence is bound to get KILLED Immediately. Such process will likely report Non-Zero Exit Code. This was important, because if you keep those process running they would take CPU burst, making your system slow. (requested by : imposter)

Now, if your program crashed or assert failed. You would get such messages on the message box. You can use it to debug by printing stuff to stderr, if program exits abnormally, editor will show all the stderr contents on message box. If program was exited normally, the output box will also show stderr apart from stdout in red color. (requested by : errorgorn)

New Session had a bug

A new session is something that resets the state of the editor. Removing all buffers and creating editor like it was launched fresh. However this had a issue where if you opened a file and then after doing your stuff you started a new session, the old file was still kept open and could have been over-written by your new contents. It has been fixed

Now, when your cursor is near a closing bracket, the corresponding opening bracket is highlighted. It looks beautiful in dark mode. See this. Also notice how the currently opened file Path is shown as title of the window. (requested by : ashiknur) 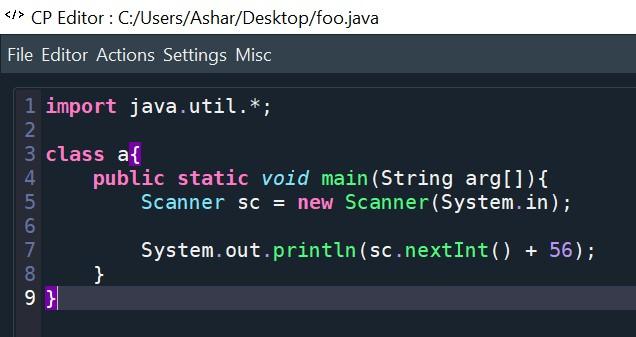 An Updater has been added that checks for newer releases of the editor after every launch of Editor. If a new release is available it will give you a hyperlink to download it. So you can be safe the updates are from me and you always have latest editor installed on your system. Its not annoying updates like Windows, it peacefully requests to update like Linux. See this

Windows user can now set CP Editor as their default C++/Python/Java Editor. You can also open any text file in CP Editor by Right click => Open with => Find and click CP Editor.exe. Mark Always if you want to set it as default for file association. In some cases windows might not show CP Editor.exe as candidate for Opening Files, in such case use Let me choose and browse to installation directory and click CP Editor.exe

As reported by many, the editor was not able to save a new file. It always saved a null file. This issue has been fixed in this release. (reported by : ashiknur)

I was aware that in interactive problems this editor will be useless, So this new release has a execution mode called "Detached Execution", You can also run in detach mode by CTRL+Shift+D. When running in detached mode, your process/program is not controlled by Editor. Hence it opens and runs your program in cmd.exe. Here you can interactively put your input. Make sure to pause program, otherwise detached mode closes as soon as your program returns. Detached mode works for all languages. On UNIX you will need to have xterm installed for it to work.

Due to a higher version of Linux (I use Arch) that i used to pack the editor, those with lower glibc were unable to run the application. It has been fixed, now I am including the glibc inside of AppImage, this increases the size of the App, but Small price to pay for Salvation.

Help => Use Beta will enable you to get update notifications for Beta releases of application. This channel is updated every day. So turn this feature if you want to use and be on bleeding edge of CP Editor releases.

Please give stars to the project

You should have already got an update notification, otherwise use the above link

This blog is outdated. See https://cpeditor.org

Hi Guys! For the past couple of weeks, I was working on a new Code Editor for Competitive Programmers. Today, I am happy to present it to you all, the first release of CP Editor.

But First, Why we need a new editor?

There exists so many code editor of all types, written in all languages but all of them are tailored down for Development of Software and none is specially focused for Competitive Programming. As competitive Programmers, we need our Editor to be Fast, Reliable and Something that just works. We focus mostly on correctness of our code and this involves compiling and re-running on sample test cases again and again.

CP Editor is Fast written in Native C++ (Qt), Cross-platform (works everywhere), and has all basic features that a competitive programmer needs from an editor. CP Editor takes away your responsibility of compiling the code and running it on your sample test cases. It automatically with just one click or keystroke compiles and runs your program and gives back to you the output.

This is a code editor and does not come with any Compiler bundled.

So you will need mingW-gcc or clang or msvc on your PATH.

As with every great software, this Editor also comes with all its code open-sourced and you can verify for yourself that your code remains on your machine and never goes anywhere.

The project is available at https://github.com/coder3101/cp-editor2

For complete instructions, setup queries and other issues please refer to the above URL.

If you face any issue regarding VCRUNTIME140_1.DLL MISSING.

Please Install Microsoft Visual C++ Redistributable for Visual Studio 2015, 2017 and 2019 for your system.