By Alex_KPR, 5 years ago, translation,

The VK Cup is in full action down here!

Zlobober has already given a quick look at the main activity of the guys who got to warm summer St.Petersburg yesterday and checked in the luxurous Courtyard Marriott hotel. Yes, the program is eventful and madly entertaining: yesterday they walked on the rooftops in the heart of the cultural capital of Russia. Today they had lunch on a little ship during a tour along rivers and canals. Besides, the weather has been really good to us!

This time, all the serious events take place opposite the Kazan Cathedral in coworking with VK, in the freedom space. And the morning started with a crazy test round with two spectacular problems, where the first problem was a quiz problem with ten test questions. SobolevTeam achieved a landslide victory. They used a cool idea: according to the Codeforces contest rules, hacks show the contestant's response. The most important thing here is the expected valid result. That's why the team quickly sent and blocked their solution and in the end, didn't submit the problem :P. But their hacks helped them to quickly find the correct responses and then they hacked everybody whose response does not match the correct one. And what do we have in the end? 19 successful hacks! 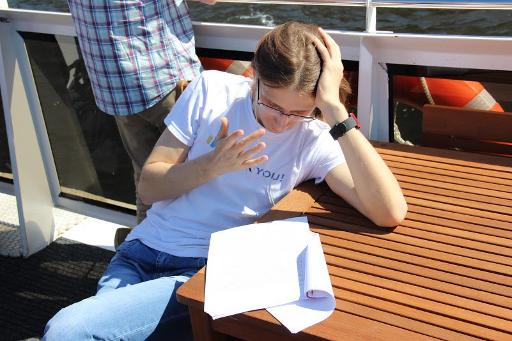 During the tour the guys had fun reaching for metallic structures of bridges and feasted on tasty food. The most responsible ones studied the rules of the forthcoming CodeGame, thinking through non-trivial strategies. Oh yes, right now the CodeGame Coding phase is in progress!

The guys need to think through the strategy of controlling a battle mage: collect heal and mana potions, cast all sorts of stuff correctly. I love such game-based events as it is a great opportunity to get used to the work place and get our hands working. =)

In the evening, after a small tour around the VK office, the participants will have a TechTalk with the developers and a CodeGame Show that will determine the team with the most effective mage-controlling strategy.