1. Football game. Originally it was supposed to be a real football game, but it turned out to be tricky implementation-wise, so it was replaced with an Xbox game. The best thing I can say about this idea is to stay silent about it; but it's certainly the most sexist thing I've heard at TopCoder ever since the Marathon match which aimed to predict outcomes of a football tournament.

2. "Holiday Photos" required taking photos accordingly to a list of tasks. I voted for this idea myself and was really looking forward to participating, but got disenchanted as soon as the idea's author proclaimed me to be ineligible. The competition turned out to be for TCO finalists only, as if bloggers don't want to win a trip to TCO'12. This idea either didn't get much passion, or I simply didn't notice most of it; as a matter of fact, I have evidence of only two people participating in it, and that's the winner and [[SkidanovAlex]].

3. "Amazing Race" involved running around the place and completing some tasks. The idea itself is quite good — last year in Las Vegas if was quite fun even to watch, but the implementation this year was not so impressive. As I've mentioned before, Hollywood is by far not Las Vegas, and there are next to no interesting places within walking range from Westin Diplomat. That's why the author limited the tasks to the area of the hotel itself. Here you can have a look at the list of tasks (it's hard to believe, but none of them required even going to the beach, not to mention the ocean itself), and here are the participants at the finish. This competition took place on Tuesday evening, and went completely unnoticed for me as well :-)

4. "Treasure Map" was the second of the ideas I hoped to take part in; it involved cracking a series of puzzles disguised as a search for buried treasure. I even had access to the statements first of all participants — they were in the list of things I was packing in the bags. However, this gave me no advantage — my innate honesty insisted that I don't peek at the tasks, so I first looked at them only on Sunday, after Rustyoldman hinted me that the finalists already get their bags, and I was going to end up being the last one to start solving. To my great embarrassment, I've solved only the first puzzle, which was a sudoku. The next one was a crossword, followed by something even more mysterious, I started feeling lazy, and I've always had something more interesting than puzzle solving... Hmm, now the limited success of my Puzzle Contest becomes clearer :-)

Besides, TopCoder ran several meetings aimed at intensifying communication between tournament visitors. First of them was Tweet Up — a meeting which was very mysterious and thus not really popular. All we knew about it was the time (Monday evening) and the location (one had to get there using the hotel shuttle). "Shuttle? No way!" — I declined emphatically (buses are by far not my favorite kind of transport) and went for another walk at the Broadwalk. Evidently, most members had more or less the same ideas about this meeting; in the end the Tweet Up turned out to be a party with a lot of drinks visited by approximately 2 TC members and over a dozen admins.

There were also several meetings with TopCoder clients going in parallel with the competition rounds. Last year they were part of everybody's schedule, and I even attended one, and two more speeches were combined with dinners (can't say this union improved any of the components; I feel positively uncomfortable chewing when someone speaks). But this year these meetings existed separately from the rounds — both in terms of schedule and location — so I can't say anything about them.

Finally, Wednesday morning was devoted to a meeting with USA schoolchildren and Dean Kamen. Originally I was informed about it, and I even agreed to have a talk with one group of children (Jessie had this idea that I was a very special member of TopCoder community, and children would be excited about meeting me). But by Wednesday I've somehow forgotten about this, and seeing the mass of children filling the Arena came as a surprise. To tell you the truth, I panicked and after the end of Dean Kamen's speech (a very impressive one, by the way) made sure that nobody's looking for me and escaped for the ocean. I figured out there's nothing worse than a shark out there, and that's much better than a group of children.

The best entertainment of all at the onsite is the least advertised one — the ocean. 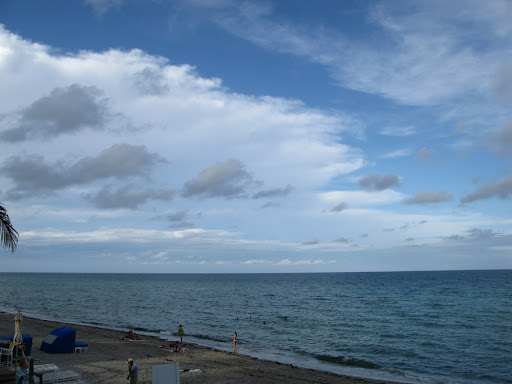 No, the food was excellent too (I still regret eating only two or three pieces of shrimp shashlick instead of six or seven I wanted to consume), but one can have a good dinner at home, while this trip was the first time I've seen the ocean. It turned out to be much better than I expected — warmer, shallower and more comfortable: no jelly-fish, little litter and reasonable waves. This is, reasonable for most people; personally I got disappointed and turned to the shore whenever even a small wave splashed in my face. Usually this happened at a depth of my height, so I never went much deeper than that. The things which disappoint some people are fine for others: shallow waters extend quite far out, and even at my preferred depth I could enjoy the illusion of swimming in mid-ocean :-) 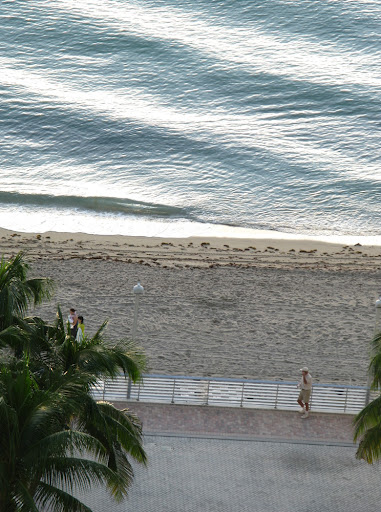 I discovered the ocean on Monday evening. Basically, my official blog shows this very well — at this point the Niagara of my posts (8 posts in 3 days is no laughing matter) ran dry and turned into a small dribble of obligatory posts. But on Tuesday Algorithm rounds started, and the rest of the bloggers cheered up, so the overall quality of the blog suffered almost no damage.

One of the obligatory posts was "something about a sponsor". There were three sponsors (Mashery's booth onsite had no representatives) vs four bloggers, so we shared them easily, and I got MemSQL. I'll note without false modesty that my sponsor was the luckiest one. Facebook got no highlight at all, Intel's post recited their advertisement (even without photos!), and I spend half of Monday and most of Tuesday on creating a masterpiece as magnificent as an advertorial can be.

But I got distracted; one can talk about the work at any time, and I'm telling about fun things. The second spot in the list of the best things at TCO was occupied by the hotel's swimming pool, discovered at some point on Tuesday. I got no decent photos of the pool, so I'll let myself borrow a couple of photos from vepifanov's album. 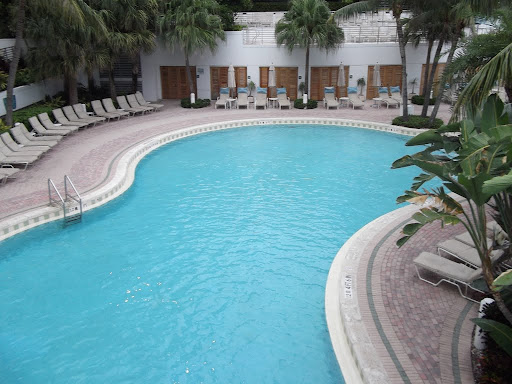 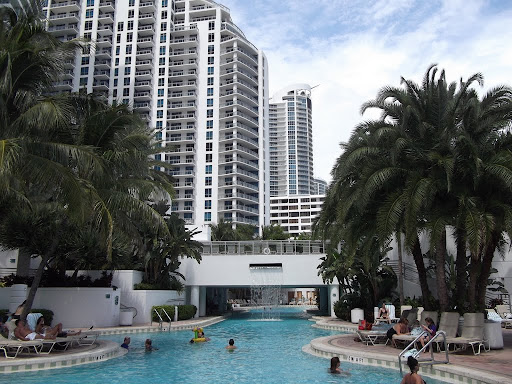 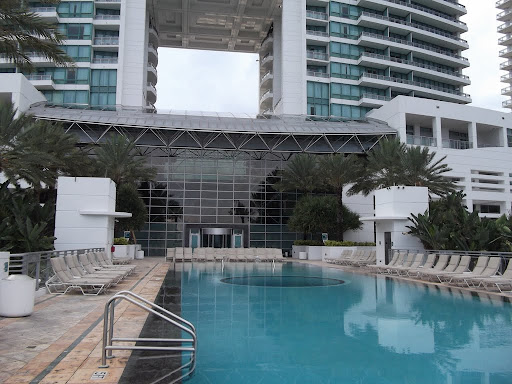 The swimming pools network consisted of three parts — the main one, the upper one on top of it and a jacuzzi nearby. The main pool had a nice waterfall (which unfortunately I didn't try out — we reached the pool only at night when the ocean was getting scary, and the waterfall used to be turned off during nighttime), and the upper one had a transparent bottom right over the main pool.

And the third spot in the list was unexpectedly filled at the Awards Ceremony: for once in a blue moon I took part in it instead of watching side-wise. If only you heard the applause when I entered the stage! Alas, I got not the champion's cup and not the Spirit Award, and not even one of the TCO'12 trips given away in TopCoder competitions. Intel was having a raffle with a Lenovo laptop as the main prize, and at the drawing unexpectedly decided to add ten consolatory prizes. And they did. The trick was, to get a prize, the person had to be present in the Arena during the drawing, which started 15 minutes prior to the schedule, so there were not many people around. Girls from Intel drew names one after another, Jared (TopCoder voice) called them out — and nobody was there. Around tenth name the audience met each next name with a laugh. My name was 13th — and I was the first winner present in the room; this explains the delight of the spectators. The gift itself was so-so — a flash drive and a sticker for a 13" laptop (which I don't have), but the fact of having won something is very nice. 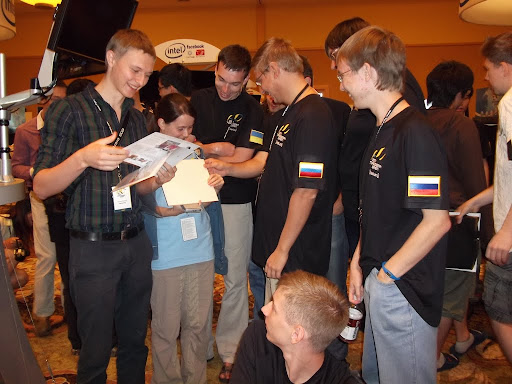 After this the main Awards Ceremony took place, followed by the Closing Reception on an ocean-facing terrace (a great idea but looking for tables occupied by Russians or providing food in the darkness was pretty hard) and one more night swim... And in the morning it was already time to pack up. I adhered to my principle of traveling light-handed, and got exactly as many gifts as could have been packed in my backpack. These were mainly new clothing items — a TCO11 t-shirt, a TCO08 admin-style shirt and (hip hip hurrah) a Codeforces t-shirt! Unlike the sponsors who give away their t-shirts only after an interview with them, MikeMirzayanov presented me with a t-shirt seeking absolutely no profit :-) Well, at least strictly before we started discussing business issues ;-)

On Thursday it turned out that my plane departs in the evening, and the check-out is at noon, so I was facing a couple of hours to spend. I felt too lazy to take a walk, swimming was out of question, and a sleepless night before was starting to show, so I stayed in the lobby, writing the goodbye post to the official blog and waving goodbye to people departing before me. It's a pretty sad thing to do, very much like deconstructing the Arena which I'm lucky not to take part in.

In return my way home was near to perfect. I had plenty of time to study the airport and its ecological decoration (South Terminal, the Everglades story). In plane to Zurich I got a B seat, and the girl from A seat went somewhere else, so I occupied both seats. A stately tall Valkyrie would have had a tough time anyways, but my height granted me enough place, so I slept through the whole flight up to the breakfast. The plane arrived before time, so I even had time to check Zurich duty-free shop for my favorite chocolates — I couldn't really return home without any souvenirs at all.

In Kiev I had to go directly to a lecture on algorithms, and by the end of it I was already half asleep. But that's a different story altogether...