You are given a range [A, B]. You're asked to compute fast how many numbers in the range are divisible by both x and y. I'll present here an O(log(max(x, y)) solution. We made tests low so other not optimal solutions to pass as well. The solution refers to the original problem, where x, y ≤ 109.

The only thing not discussed is how to calculate the number M given 2 number x and y. You can use this formula M = x * y / gcd(x, y). For calculate gcd(x, y) you can use Euclid's algorithm. Its complexity is O(log(max(x, y)), so this is the running time for the entire algorithm.

I want to apologize for not estimating the real difficulty of this task. It turns out that it was more complicated than we thought it might be. Let's start explanation.

Before reading this, you need to know what is signed area of a triangle (also called cross product or ccw function). Without it, this explanation will make no sense.

Each quadrilateral has 2 diagonals: connecting 1st and 3rd point and connecting 2nd and 4th point. A diagonal divides a plane into 2 subplanes. Suppose diagonal is AB. A point X can be in one of those two subplanes: that making cross product positive and that making cross product negative. A point is in "positive" subplane if ccw(X, A, B) > 0 and in "negative" subplane ccw(X, A, B) < 0. Note that according to the constraints of the task, ccw(X, A, B) will never be 0.

Despite this is a math task, the only math formula we'll use is that number of permutations with n elements is n!. From this one, we can deduce the whole task.

The only problem remained is how to calculate S2. Simple iteration won’t enter in time limit. Let’s think different. For each element, I need to make sum of differences between it and all smaller elements in the array a. As well, I need to make sum of all different between bigger elements than it and it. I’ll focus on the first part. I sort increasing array a. Suppose I’m at position i. I know that (i – 1) elements are smaller than ai. The difference is simply (i — 1) * ai — sum_of_elements_before_position_i. Sum of elements before position i can be computed when iterating i. Let’s call the obtained sum Sleft. I need to calculate now sum of all differences between an element and bigger elements than it. This sum is equal to Sleft. As a proof, for an element ai, calculating the difference aj — ai when aj > ai is equivalent to calculating differences between aj and a smaller element of it (in this case ai). That’s why Sleft = Sright.

As a conclusion, the answer is (S1 + 2 * Sleft) / N. For make fraction irreducible, you can use Euclid's algorithm. The complexity of the presented algorithm is O(N * logN), necessary due of sorting. Sorting can be implemented by count sort as well, having a complexity of O(maximalValue), but this is not necessary.

A good way to approach this problem is to notice that you can't build the graph. In worst case, the graph will be built in O(N2) complexity, which will time out. Also, notice that "maximal independent set" is a NP-Hard task, so even if you can build the graph you can't continue from there. So, the correct route to start is to think of graph's properties instead of building it. After sketching a little on the paper, you should find this property:

Lemma 1 Suppose we choose 2 indices i and j, such as i < j. We'll have an edge on the graph between vertices ai and aj if and only if ai > aj. We'll call that i and j form an inversion in the permutation.

Proof We assume we know the proof that bubble sort does sort correctly an array. To proof lemma 1, we need to show two things.

To proof 1, if bubble sort wouldn't swap an inversion, the sequence wouldn't be sorted. But we know that bubble sort always sorts a sequence, so all inversions will be swapped. Proofing 2 is trivial, just by looking at the code.

So far we've got how the graph G is constructed. Let's apply it in maximal independent set problem.

Lemma 2 A maximal independent set of graph G is a longest increasing sequence for permutation a.

The task reduces to find longest increasing sequence for permutation a. This is a classical problem which can be solved in O(N * logN). Here is an interesting discussion about how to do it.

In this task, author's intended solution is an O(N ^ 2) dp. However, during testing Gerald fount a solution using principle of inclusion and exclusion. We've thought to keep both solutions. We're sorry if you say the problem was well-known, but for both me and the author of the task, it was first time we saw it.

After reading the sequence, we can find which elements are deleted. Suppose we have in a set D all deleted elements. I'll define from now on a "free position" a position which has -1 value, so it needs to be completed with a deleted element.

If k = 0, the problem becomes straight-forward. The answer for dp(n, 0) will be n!, as each permutation of (n + 0) = n numbers is valid, because all numbers can appear on all free positions. We can also calculate dp(n, 1). This means we are not allowed to place an element in a position out of (n + 1) free positions. However, we can place it in the other n positions. From now we get n elements which can be placed anywhere in the n free positions left. Hence, dp(n, 1) = n! * n.

We want to calculate dp(n, k) now, k > 1. Our goal is to reduce the number k, until find something we know how to calculate. That is, when k becomes 0 or 1 problem is solved. Otherwise, we want to reduce the problem to a problem when k becomes 0 or 1. I have two cases. In a first case, I take a number from numbers which can be placed anywhere in order to reduce the numbers which can form fixed points. In the second case, I take a number from those which can form fixed points in order to make the same goal as in the first case. Let's analyze them.

Case 1. Suppose X is the first free position, such as in the set of k numbers there exist one which cannot be placed there (because it will make a fixed point). Obviously, this position exist, otherwise k = 0. Also obviously, this position will need to be completed with a term when having a solution. In this case, I complete position X with one of n numbers. This will make number equal to X from the k numbers set to become a number which can be placed anywhere. So I "loose" one number which can be placed anywhere, but I also "gain" one. As well, I loose one number which can form a fixed point.

Case 2. In this case position X will be completed with one number from the k numbers set. All numbers which can form fixed points can appear there, except number having value equal to X. So there are k — 1 of them. I choose an arbitrary number Y from those k — 1 to place on the position X. This time I "loose" two numbers which could form fixed points: X and Y. As well, I "gain" one number which can be placed anywhere: X.

This recurrences can be computed by classical dp or by memoization. I'll present DamianS's source, which used memoization. As you can see, it's very short and easy to implement. Link

I'll present here an alternative to the dynamic programming solution. Let's calculate in tot the number of deleted numbers. Also, let's calculate in fixed the maximal number of fixed points a permutation can have. For calculate fixed, let's iterate with an index i each permutation position. We can have a fixed point on position i if element from position i was deleted (ai = -1) and element i does not exist in sequence a. With other words, element i was deleted and now I want to add it back on position i to obtain maximal number of fixed points.

We iterate now an index i from fixed to 0. Let sol[i] = the number of possible permutations having exactly i fixed points. Obviously, sol[0] is the answer to our problem. Let's introduce a combination

representing in how many ways I can choose k objects out of n. I have list of positions which can be transformed into fix points (they are fixed positions). I need to choose i of them. According to the above definition, I get sol[i] =

. Next, I have to fill tot - i positions with remained elements. We'll consider for this moment valid each permutation of not used values. So, sol[i] =

. Where is the problem to this formula?

The problem is that it's possible, when permuting (tot — i) remained elements to be added, one (or more) elements to form more (new) fixed points. But if somehow I can exclude (subtract) the wrong choices from sol[i], sol[i] will be calculated correctly. I iterate another index j from i + 1 to fixed. For each j, I'll calculate how many permutations I considered in sol[i] having i fixed points but actually they have j. I'll subtract from sol[i] this value calculated for each j. If I do this, obviously sol[i] will be calculated correctly.

Update per range, query per element

When dealing with complicated problems, it's sometimes a good idea to try solving easier versions of them. Suppose you can query only one element each time (x0 = x1, y0 = y1).

To query about an element (X, Y), that element’s value will be the xor sum of submatrix A(1, 1, X, Y). Let’s take an example. I have a 6x6 matrix and I want to xor all elements from submatrix (2, 2, 3, 4) with a value. The below image should be explanatory how the method works:

You need a data structure do to the following 2 operations:

Both operations can be supported by a Fenwick tree 2D. If you don't know this data structure, learn it and come back to this problem after you do this.

Coming back to our problem 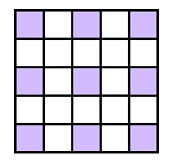 Yep, that's right! There are 4 cases, diving the matrix into 4 disjoint areas. When having a query of form (1, 1, X, Y) you only need specific elements sharing same parity with X and Y. This method works in O(4 * logN * logN) for each operation and is the indented solution. We keep 4 Fenwick trees 2D. We made tests such as solutions having complexity greater than O(4 * logN * logN) per operation to fail.

Key observation Suppose you have 3 boxes containing A, B, C candies (A, B, C all greater than 0). Then, there will be always possible to empty one of boxes using some moves.

Our algorithm so far:

if A is 0, then exit function.

The proposed algorithm may look abstract, so let's take an example.

Here is a source implementing the algorithm. 4383485

Instead of a conclusion, I'll post here related problems to the ones used in the round. :) Please note that some of them might be more easier / complicated than level of difficulty used in the round. Feel free to think of them / ask help / discuss them in the comment section :)

Div2 B Given a very long list of special points, can you find quickly a convex special quadrilateral? Can you find very very quickly? :) Also, can you find maximal area of a special convex quadrilateral in time better than O(N4)? Solutions for first problem and second problem provided by Xellos and Enchom

Div2 D / Div1 B Suppose the reverse problem. You are given a bubble sort graph having N vertices and M edges. Find its independent maximal set. Can you achieve O(N2) to do this? Does a solution in O((N + M) + N * logN) exist? Solution by CountZero

Div1 E In our algorithm, we pick arbitrary 3 boxes. Can you find some heuristics of picking 3 boxes to reduce number of moves?