[HELP] What is the proof of this greedy solution ?

Basically you are given an array and you have to keep removing any two unequal elements until the size of the array is minumum.

In the editorial it's said:- We get the following greedy solution — each time we take two characters with maximal occurrences number and delete them.

Can anyone plz tell why this solution always give the optimal answer ? Like why everytime we are selecting the elements with maximum frequency?

Heavy Cheating in Educational Codeforces Round 115 !!!

I did not give today's contest today but accidently I looked at the scoreboard and found a lot of submissions for problem A, B, C , D which were much higher than usual.

Hence, I looked online and found that all the solutions for the first 4 problems were leaked.. HERE are the screenshots. I don't want to share the link of the website , it's just for reporting 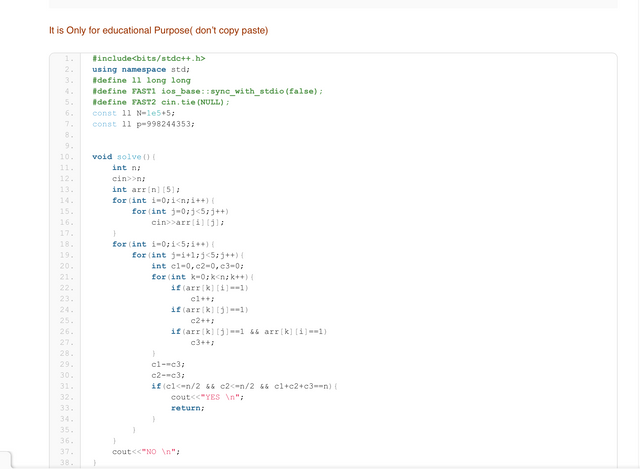 Is this a Codeforces glitch ???

Today, just out of curiosity I saw IBaloff profile, and his rating graph looked something like this

Hello everyone! This is my code for submission of this problem that occured in today's Div-3 contest

Here the judgement for the case 31 of test-case 2 says:- wrong answer Exceeded limit of person 8 on step 4 (test case 31)

My code is giving the following output:-

I could not find any error in the answer. Person 8 has 2 sociability .Hence can appear in at-most 2 times.Where is the issue then??

To all those who were asking for more frequent contests !!! 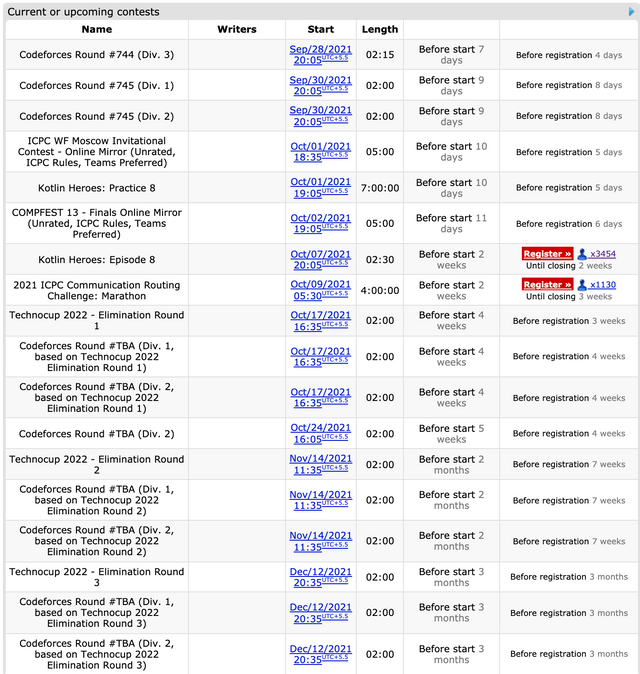 In todays September Cook off DIV-2

Here are the some of the people's submission of Adjacency Problem

For the problem Chef and Pairwise Distances

For the problem Zebra Crossing :-

For the problem, Fake Swaps This is the condition for a Div-2 contest. 4 out of 7 problems

Problem in logging to USACO guide

Is anyone facing the same issue?? Codechef PLAGIARISM has reached its peak !!!!!!!

I already wrote in my previous blogpost here, what would happen in this contest ...

HERE are the solutions that were leaked as already mentioned before

Here are the leaked images(THERE WERE MANY OTHER SOURCES ): —

These are the free ones.. Not including the paid ones Not just this, people were simply discussing the solutions in the respective groups. So , for someone who gives the contest seriously HAS to solve the 6th problem so that his/her rank is not affected by this cheating which is really very difficult for any beginner who has started just a few months or even years ago... Hence I seriously dont understand what should we do !!!!!!!!!!!!!!!!!!!!!!!!!!!

Till this it is fine... But this contests has become a buisness for some people.. Some were asking Rs 50(about 0.7$) per problem in Youtube & Telegram per user.. In fact some were even offering CP classes by giving there number etc..

I SERIOUSLY THINK CODECHEF SHOULD STOP CONDUCTING THESE CONTESTS ... BECAUSE MOSTLY PEOPLE(in india especially) HAVE TURNED THIS STARS AND RATING INTO BUISNESS AND SELLING CODES. IT'S A SHAME AND CODECHEF SHOULD BE RESPONSIBLE FOR THIS...!!!!!!!!!!!

UPD:- Since many were saying that this blogpost is an advertisement to share these links for future contests, I blurred the channels name

So today there is Codechef starters . I think everyone knows what would happen in the contest.

Some problems would be given . After a few minutes, the solutions would be out on Youtube and Telegram . People will buy/copy from them and submit them… Some will waste their time in finding plagiarism by looking at the submissions and reporting them… No action would be taken by the admin and then another contest will come… This cycle will go on and it is happening for the last 1 year. Hence , I request everyone of you to DONT give todays starters contest. If the submissions are less, then the admin would surely take some action. Simply reporting the submissions is not working. So,

IF YOU SERIOUSLY WANT PLAGIARISM TO STOP, THEN PLEASE DON’T ATTEMPT ANY CODECHEF CONTESTS UNTIL PLAGIARISM CHECKS ARE DONE !!!

I have given a couple of contests on Codeforces till now. I am able to do the first 2 problems in a Div-2 contest , hence get a rank of about 6-7k . I am sure if solve them quickly and don't loose points on wrong submissions , I could reach 4-5k easily. But to get a better rank I need to solve C & D.

Can any please advice or share some tips/tricks about how to solve C & D problems in Div-2 contests? The problem is that on reading the editorial, I find the problems quite easy and I am able to implement them on my own(mostly). But during the contest , I don't get the idea about how should I approach them. Mainly they are of constructive algorithm types but some(D mainly) contains DP & graphs.

Should I simply start solving from the Codeforces problem set by setting the difficulty level 1400-1700 or there is something else that I should do ?