By jonathanirvings, history, 5 years ago,

I created this post a year ago (wew, I didn't realise it's already a year) after WF 2014, but I accidentally deleted it just now :'(

Here are several photos of me with famous people I met in ACM ICPC World Finals 2014. It is a great honour to met these people :) 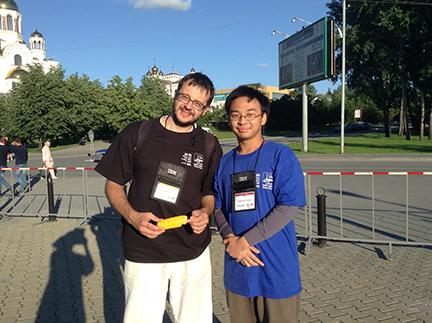 I think everybody in this forum know who he is :) 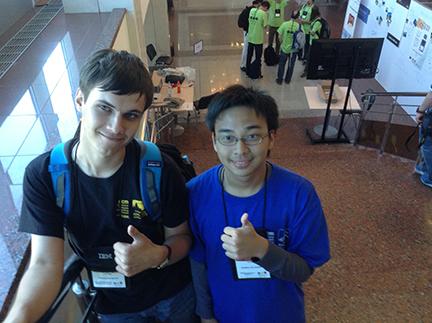 me with tourist. As we know, he isn't competing this year, and I don't know what is he doing here. :p This is the second time I took picture with him. I took a picture with him two years ago in IOI 2012 :) 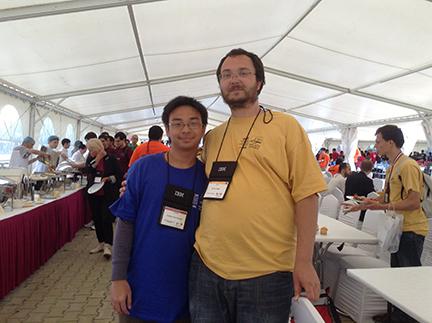 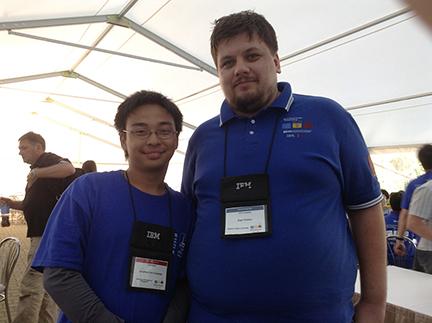 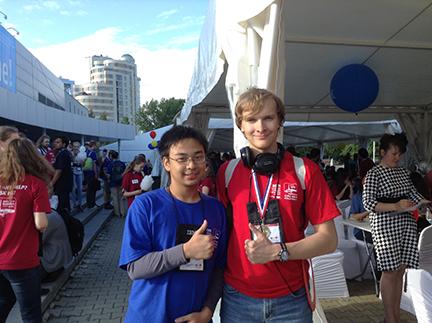 me with yeputons. One of the member of St. Petersburg State University (the champion) team. 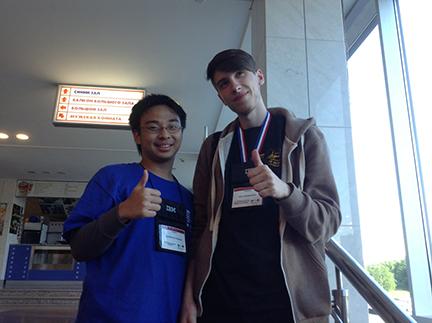 There are also other several 'targets', but I didn't manage to get the photo with them :'(

but I didn't manage to get the photo with them :'(

This year (2015), I am also in ICPC World Finals and I managed to take more photos with people that I didn't manage to get the photo with :) 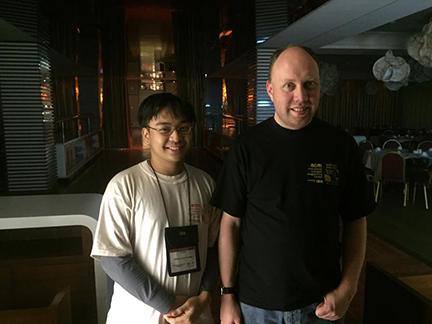 me with andrewzta, coach of SPB SU ITMO.

I accidentally discard the original post :'( Luckily I have the backup :) (but all of the comments are gone, though :( ). Let me repost it.

My target : Being red in TopCoder (or Codeforces also OK) before ACM-ICPC World Finals 2014. I remember watching live scoreboard of last year's ICPC WF in ahmed_aly's site. In that site, beside the team's name, there are the TC handles of the team's members. I want to make my handle red :p

Switch to Codeforces. My Codeforces rating was 2131. I participated Zepto Code Rush yesterday without any desire to make it red. But unpredictably, I got +72 and become red in Codeforces :') I take this as a comeback! (I failed several last rounds, including SRM624 and GCJ Round 2) I will keep this rating until World Finals (I will rest from Codeforces until WF) :)

PS : This comeback will be complete if I can make my TopCoder handle red at the last SRM before WF, TopCoder SRM 625 :))

Following this comment and this post, let's collect the handles of the participants of ACM-ICPC World Finals 2014 :)

I will start with the data from PavelKunyavskiy's data in this comment. (big thanks for him).

EDIT : I decided to move it here

Please comment below to add your team (or your friend's team) to make the data complete. Please also comment below if you find any inaccurate data.

As you may know, Codeforces Round #192 was written by Indonesians: dolphinigle, fushar, and me.

For me, this is my first 'international' contest. I never wrote a problem in both Codeforces and TopCoder before. I think my 'writing' skill isn't enough yet :(

So, in this post, I would like to personally thank dolphinigle and fushar, for giving me the experience of writing an 'international' contest. Without them, I won't write such an amazing round (at least, not now). How can I write Div-1 problems... :|

Once again, thanks a lot :)

PS : My contribution to that contest is only Div-2 problem. If you like the contest because of Div-1 problems (e.g. the "special output-only" Div1-D), thank them :)